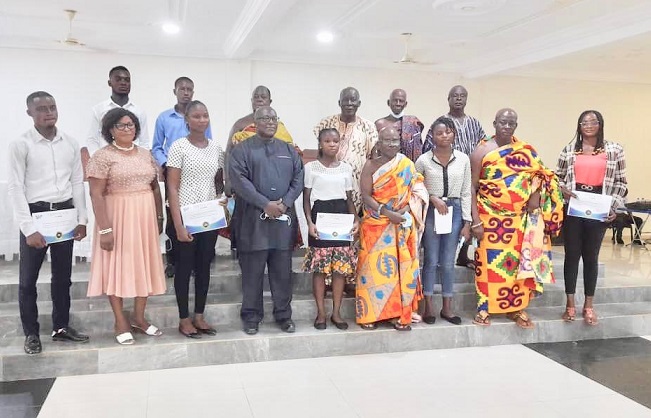 One hundred and forty-two students from five communities in the Shama District of the Western and Greater Accra Regions have received full scholarships to enable them pursue their education at the tertiary level.

One hundred and four of the beneficiaries are from the Aboadze area (Aboadze, Abuesi, Dwomo, Lower Inchaban and Shama communities) of the Western Region, while the rest are from Tema Manhean and Kpone.

The beneficiary students are pursuing medicine, pharmacy, engineering, law, social sciences, actuarial science and mathematics, while a few others have already completed their first-degree programmes.

Development of the communities
Speaking at the ceremony, the General Manager Corporate Affairs of the West African Gas Pipeline Company Limited (WAPCo), Dr. Isaac Adjei Doku said for the past 9-years, the company has invested more than ¢4 million on the programme in the country.

“We believe that in the not distant future, our host communities will have a number of professionals who would contribute to the development of their communities”, he said.

He said WAPCo’s investment in the communities was informed by the fact that the company believes that through such initiatives it could contribute to the development of the communities in which it operates.

The objective of the scholarship, he said, was to support brilliant but needy students to obtain secondary and technical education, and now university education as well as development of entrepreneurs.

He said each year WAPCo supported 10 young people from each of their seven host communities in Ghana to pursue their education. Five of the beneficiaries were selected under the scholarship scheme and the other five for the Community Youth Enterprise Scheme.

The CYES provided the youth who had completed basic education but could not pursue further studies due to financial constraints the opportunity to learn a trade of their choice in recognized vocational and technical institutions in Ghana.

Infrastructure
From the outset of the WAGP Project, WAPCo decided to invest in the development of its stakeholder communities, particularly in programmes that have had cumulative impact on the generality of the communities in which it works.

He said at the early stage and during the construction phase of the pipeline system, its investments in education were to assist local governments to provide the necessary school infrastructure in communities that lack them.

“As a result, we have constructed a number of school projects in the district; key amongst them were the Abuesi Methodist Primary School, Shama Model School Junior High School and Kindergarten school blocks, and renovated the Dwomo Methodist Junior High School,” he said.

He said so far, the schemes have supported 447 students made up of 339 students in the mainstream scholarship scheme and 108 students under the skills acquisition programme

“Scholarship from WAPCo has always been for a three year period and not on a yearly basis as it has been done by other companies,” he said, and urged parents to take full responsibility of their children and provide their other needs.

The Shama District Director of the Ghana Education Service, Mrs. Afia Anoakoah-Quansah noted that WAPCo continued to invest in the communities in which they operated and they must be commended.