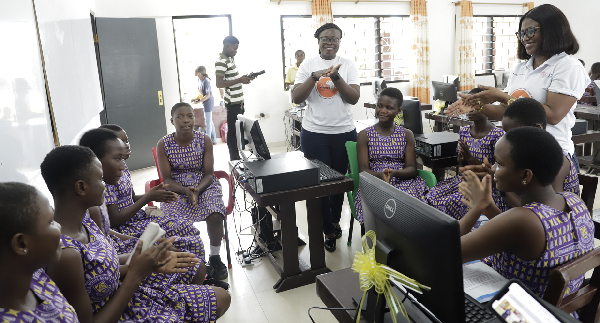 Justina Onumah, Ghanaian Ambassador for the Next Einstein Forum in an interaction with some students of the Ringway Estate Basic School during the event. Picture: EDNA SALVO-KOTEY Follow @Graphicgh

A science institution, The Next Einstein Forum (NEF), has encouraged girls in basic schools to study science, technology, engineering and mathematics (STEM) related courses at the higher education levels.

The Ghanaian Ambassador for the NEF, Justina Onumah, said there was a general misconception that those courses were difficult and, therefore, a male-dominated field.

"That is something that we want to demystify to mentor young girls and boys who, if not that someone had said science is difficult, would have ventured into science," she said.

Speaking at an outreach programme for young girls of the Osu Ringway Basic School last Friday, she stressed the need for the re-orientation of young girls to effectively study and succeed in the field.

Mrs Onumah said the outreach programme formed part of the Africa Science Week celebration which was a flagship programme of the forum.

The week-long celebration, she explained, was aimed at celebrating notable African scientists, using them as sources of inspiration to the young ones.

The event, held in partnership with an information technology (IT) firm, Developers in Vogue, saw 60 junior high school girls mentored on various African women who had achieved great strides in STEM and IT.

Members of the two institutions also shared their personal experiences of their journey in the field and advised the girls to be determined, disciplined and not afraid to take risks.

The students were also taken through some science practicals to give them a tangible understanding of the field as well as spark their interest.

The NEF, Mrs Onumah explained, was a community of individuals in the science and technology industry that believed that Africa held enough potential to produce the next Einstein.

She added that the community sought to leverage on science and technology for human development and inspire the culture of science in the young generation.

Children in basic schools, she added, were targeted to orient them on STEM and spark the interest in them before they proceeded to the senior high school where they began to make life defining decisions.

The Operations Manager for Developers in Vogue, Victoria Sackey, said the institution was a women’s tech hub that trained women in ICT related courses such as web development, date marketing, graphic design, data science and cybersecurity.

She said the idea for the Africa Science Week was to bridge the gender digital divide and get more women interested in the tech space.

“The mentors are taking them through some famous women who have made it through the STEM field and also sharing their personal stories in their journey,” she added.

A student, Audreyna Noi, said she thought science was difficult until she learnt of the same mishap one of the mentors went through.

“I would like to take up science as a major course. I would go into the field of medicine and become a nurse,” she said.