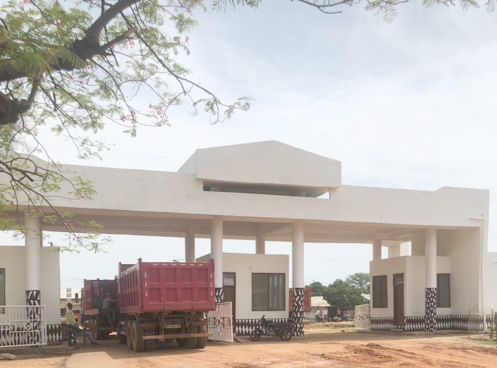 Work in progress at the entrance of the college

Movement within the campus of the St John Bosco’s College of Education at Navrongo in the Upper East Region will be improved significantly with the award of a contract for the upgrading of the roads in the college by the Ministry of Roads and Highways.

The construction work will cover the main college entrance through the frontage of the administration block to the main Catholic chapel, the college council chamber, Tono and Morin Halls.

The 2.5km of the major campus roads will link the old lecture theatre, through Abedi Pele Hall and the college’s practice basic schools to the staff bungalow area to the exit of the second gate of the college.

The work, which is being executed by Plans construction limited, Accra, will also include the drainage.

The Principal of the college, Profe Joseph Amikuzuno, explained that the facelift followed the re-awarding of the deplorable road network, which impaired vehicular movement within the campus.

He said the situation slowed down the pace of movement, especially during rainy seasons,  and as such he was happy that the ministry re-awarded the contract, which was given out in 2017 but was not executed until now. The current contractor began work since mid-June 2021 with the first stage/phase of the project.

Prof Amikuzuno appealed to the ministry, the contractor and engineer responsible to ensure the timely completion of the project to give a phase lift to the roads in the college to facilitate smooth movement of vehicles, students and pupils of the college community.