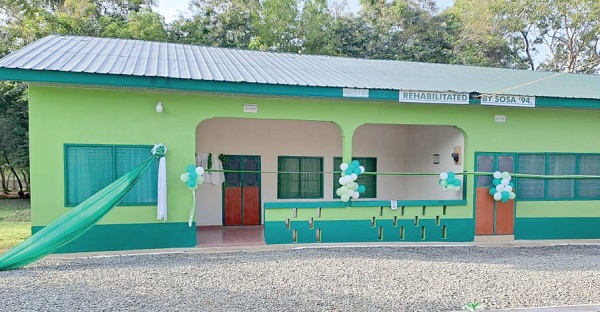 Members of the 1994 year group of the Sogakope senior high school (SOGASCO), in the Volta Region, has refurbished the school’s clinic and guest house as their contribution to the development of their alma mater.

Extension works of the clinic included roofing, wiring, plastering, tiling, and painting, as well as provision of medical items and consumables, among others.

At a handover ceremony at the school, the president of the 1994 Sogakope old student association (SOSA), Dr Godfred Amewu, said the project was initiated early this year after a visit to the school by the group’s project committee to identify which areas the association could be of help school.

“The committee identified the sick bay which has become a pale shadow of itself, as one of the facilities that needed urgent attention.

”The guest house adjoining the sick bay was in an equally bad state and the committee added it to the project,” he added.

According to him, the reconstruction of the sick bay and guest house would go a long way to improve the school’s capacity to respond to students’ health issues and also provide a decent place for guests.

He gave an assurance that the association would continue to support their alma mater to enhance effective teaching and learning.

The Headmaster of the school, Newman Dziedzoave, expressed gratitude to the 94’ year group for the gesture, describing the support as heart-warming.

He pledged to ensure the regular maintenance of the facilities and entreated other year groups to emulate the example of their colleague.