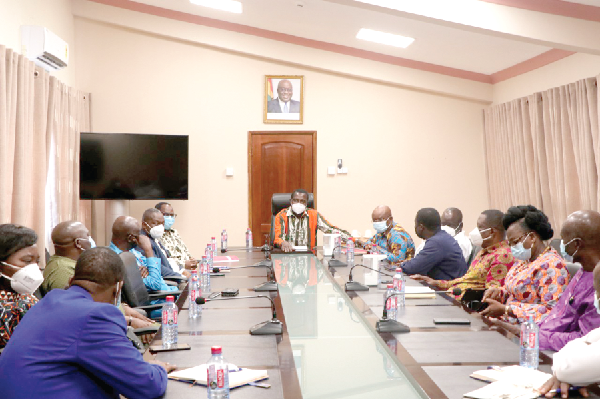 Dr Yaw Adutwum (head of table), the Minister of Education, addressing the regional ministers during a courtesy call at his office
30.5k Shares

All the 16 newly sworn-in regional ministers have pledged to support the Minister of Education, Dr Yaw Osei Adutwum, to fulfil the President’s vision of transforming the nation’s education to meet the 21st century demands.

They pledged to create the necessary enabling environment in their regions for a smooth implementation of the various transformational strategies.

Welcoming the regional ministers to his office last Friday, Dr Adutwum pledged to work with them, with the assurance of improving educational infrastructure to improve enrolment for all schoolchildren of school-age, irrespective of location, status, ethnic, religion or any other affiliations, to have access to education.

The education minister hinted that plans were far advanced towards the introduction of a ranking system for all senior high schools in the country to promote a healthy competition among all basic schools which in the long run would bring about improvement in the nation’s education standard.

Dr Adutwum further stated that the school ranking systems would provide the opportunity to identify schools which needed support to catch-up with the others already doing well.

He further hinted of plans to close the yawning gap between schools in the southern sector of the country and those in the northern part of the country in terms of the West African Senior School Certificate Examination (WASSCE) performance in the various regions.

This, he said, would be done through massive improvement in the provision of infrastructure, teaching and learning resources as well as increased number of qualified teachers posted to such areas to improve access and education outcomes in those areas.

Dr Adutwum used the occasion to present copies of the Education Strategic Plan (2018-2030) to the regional ministers and charged them to develop their regional education strategic plan in line with the national document for the development of education in their respective regions.

He further pledged to work with all of them, giving an assurance that he would improve educational infrastructure to boost the enrollment drive for all schoolchildren of school-age to have access to education irrespective of location, status, ethnic, religion or any other affiliations.

The Volta Regional Minister, Dr Archibald Yao Lestsa, who led the delegation, pledged, on behalf of his colleagues, to support the minister to improve access and quality of education in the country.