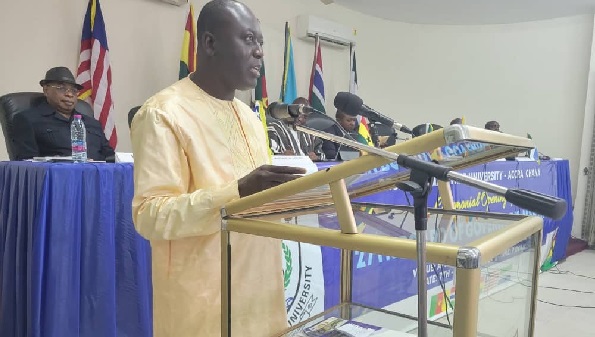 The Chancellor of the Regional Maritime University(RMU) Ebrima Sillah has tasked the university to take advantage of collaborations within the maritime sector to develop infrastructure that will enhance the delivery of quality education.

Speaking at the opening ceremony of the 27th Board of Governors(BoG) Meeting of the RMU held on Friday, Mr Sillah who doubles as the Chairman of the Board said, infrastructural development was crucial to the growth of the university and would require broader collaborative efforts.
"Let us take advantage of collaborations with other stakeholders in the maritime and allied industries to help us develop our infrastructural capacity," he stated.
As a university he said, they had proofs of infrastructural yields and benefits through collaborations with organisations such as BS,MODEC or Tullow as well as Redavia and must do well to capture other institutions to foster development.
He advised that, the Alumni Association was worth tapping into as they could become the backbone to the university's infrastructural face lift.
"It is therefore my hope that the association would gain its grounds and will be enabled to develop its capacity to champion most infrastructural developments of the university," he stressed.
He however commended the government of Ghana for their relentless support towards the growth of the university over the years.
He said, the modernisation of the RMU spearheaded by the government with support from the Exim Bank of Korea was going on steadily and would soon be in full force.
The first-of-its-kind modernisation of the RMU since 1958 by government has been estimated to cost about $146 million and would among other things provide a new special purpose training ship for the university.
"In August 2021, the feasibility studies was completed with the appraisal face from the government of Korea expected to be completed this month(June). The Board will keep monitoring the progress of this all important project," he stated.
In a speech read on his behalf, the Minister for Transport,Kwaku Ofori Asiamah reiterated that the government was committed to the development of the RMU in order to train students that would contribute to the development of the sub region.
"Ghana would continue to support infrastructure development of the RMU in order to improve the quality of learning which would produce graduates that would transform the maritime sector in the region and beyond," he stated.
The ongoing modernisation project he said, was geared towards uplifting the status and image of the RMU to become one of the best globally.
He recommended a review of the statutes of the RMU to ensure it stood the test of time and compete with other universities within the sub region.
The RMU he said, was an excellent example of regional integration and called on all member states to come out with ideas that would support the growth of the university.
The outgoing Chancellor and BoG Chairman,Mr Jean Ernest Massena Ngalle Bibehe also commended the management and staff of the university for their efforts in upholding the standards of the university.
He urged them to continue utilising technology to make learning and teaching easier for students and stay competive.
Other dignitaries present at the meeting were, the Commissioner and Chief Executive Officer(CEO) of the Liberia Maritime Authority,Mr Lenn Eugene Nagbe, the Minister of Transport and Aviation, Sierra Leone, Mr Kabineh Kallon and the Secretary-General of Maritime Organisation of West and Central Africa(MOWCA) Mr Dr. Paul Adalikwu.
Follow @Graphicgh