Professor Yankah thanks Manhyia for award 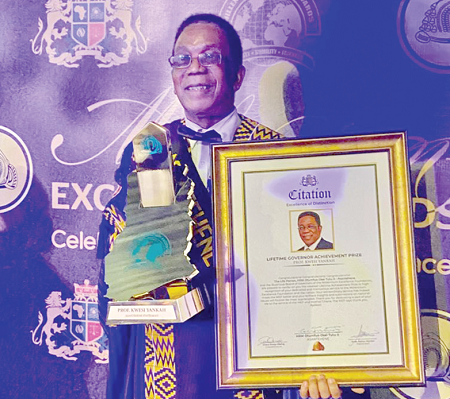 Prof Kwesi Yankah, former Minister of State in charge of Tertiary Education, displaying his award and the citation

A former Minister of State in charge of Tertiary Education, Prof Kwesi Yankah, has thanked the Asantehene, Otumfuo Osei Tutu II, and the Manhyia Palace for their contribution to him receiving the Millennium Lifetime award.

Prof Yankah was among this year's Millennium Lifetime award, a brainchild of Otumfuo Osei Tutu II.

"While I was being congratulated for the Millennium Award, I was also congratulating Otumfuo for the role played by Manhyia Palace in the grand award I received.

"I was part of a private lunch held by His Royal Majesty, where I took the opportunity to present to Otumfuo two of my books.

The Proverb  and Speaking for the Chief are used as textbooks in several universities around the globe,” Prof Yankah told the Daily Graphic in Accra.

Prof Yankah explained that the first book, which was on proverb speaking won the outstanding doctoral dissertation award at Indiana University in USA in 1985.

"It was the first by an African; and the second, Speaking for the Chief, was awarded the Gold Book award by the Ghana Academy of Arts and Sciences in 1995," he added.

He told the Daily Graphic that he found it fit to formally present copies of the two books to Otumfuor because both award winning books were based on research he conducted at Otumfuo’s Manhyia Palace.

The citation accompanying the award said, “The Life Patron, His Royal Majesty Otumfuo Osei Tutu II, Asantehene, and the illustrious Board of Governors of the Millennium Excellence Foundation are pleased to confer on you the coveted Lifetime Achievement Prize in high recognition of your dedicated and meritorious service to the Millennium Excellence Foundation and the nation.

“Your extraordinary service has indeed made the MEF better and your brilliant insights and submissions on national issues will forever be most appreciated,” parts of the citation read.

In a related development, the Private University Students Association of Ghana also presented an excellence award to Professor Yankah for his contribution to the development of private universities.

The award, the association explained, was also in recognition of the reforms he had introduced within the affiliation policies in favour of private universities.