Prez Akufo-Addo wants UDS to be renamed after Rawlings 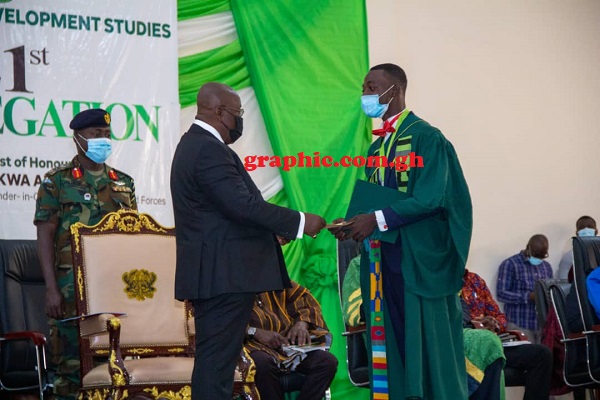 The President, Nana Addo Dankwa Akufo-Addo, has urged the Governing Council of the University for Development Studies (UDS) to revisit his proposal to name the university after former President Jerry John Rawlings, who used his World Food Prize money of $50,000 to establish the university.

The President said when he proposed to name the university after him, former President Rawlings had declined the proposal.

"If Rawlings's own sense of modesty probably compelled him to decline such a proposal while he was alive, let the people's voice now prevail, on his passing, to enable us to put on record: The J. J. Rawlings University for Development Studies," he proposed.

Speaking at the 21st Congregation of UDS on the Central Campus in Tamale last Saturday, President Akufo-Addo paid glowing tribute to the late former President and Founder of the UDS, recognising the pivotal role he had played in the establishment of the UDS.

"If this nation tearfully grieves, so does the UDS, particularly, to commemorate the pivotal role President Rawlings played in establishing and propping up the UDS as a quintessential university located within a poor environment that investigates and seeks to address community needs," he said.

He indicated that due to former President Rawlings's vision to bridge the gap between the northern and the southern sectors, he used his prize money of $50,000 as seed money to fund the establishment of the UDS.

"The UDS is, indeed, a monumental achievement of Mr Rawlings in epitomising the nation's drive towards national integration and social equity," he added.

No one-week ceremony for Rawlings, Nana Konadu not hospitalized - Office