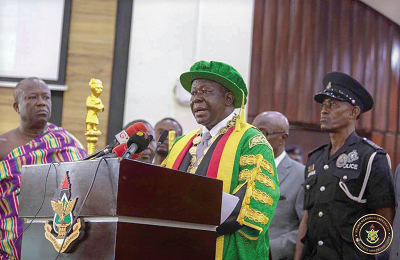 The Chancellor of the Kwame Nkrumah University of Science and Technology (KNUST), the Asantehene, Otumfuo Osei Tutu II, has called on the government to do further and broader consultation with major stakeholders on the public university bill before it is laid before Parliament.

According to the Asantehene, the bill, when passed by Parliament, must accommodate all divergent views from key players to ensure peace and harmony between the government and academia.

“The concerns and interests of all major stakeholders, such as Vice-Chancellors, University Teachers Association of Ghana (UTAG) and members of convocation across all public universities must be seen to have been taken on board in the final draft,” he said.

Otumfuo said this last Saturday at a ceremony to climax the week-long graduation ceremony of KNUST in Kumasi.

A total of 8,177 students graduated from all the six colleges of the university with various degrees and post-graduate degrees, with 930 obtaining first class, out of which 330 were females.

Otumfuo Osei Tutu II commended the government’s effort in streamlining the education sector and the necessary steps being taken to resolve the implementation challenges associated with the double-track system in the Free Senior High School (SHS) Education Policy.

The chancellor reiterated the challenges facing the university, particularly the delay in the teaching hospital project and the acute residential students’ accommodation problem on campus.

“At each graduation ceremony, I have mentioned and appealed to the government for assistance.

The government is yet to respond and I wish to make the same appeal that we need government’s intervention to resuscitate our teaching hospital project,” he said.

He believed the accommodation problem on campus would be aggravated during the 2020/2021 academic year when the beneficiaries of the Free SHS Policy would be admitted.

The Asantehene announced that the committee set up to investigate the 2018 demonstration on campus had completed its work and submitted its report, indicating that the report would be released in due course for further consultation.

The Vice-Chancellor (VC) of KNUST, Prof. Kwasi Obiri Danso, said the university would establish a campus at Obuasi in September this year to run courses in Electrical and Electronic Engineering, Civil Engineering, Mechanical Engineering among others and short courses in Business Administration.

He appealed to the government through the Ghana Education Trust Fund (GETFund) to release funds promised the university to complete the projects on time to avoid problems during the admission of students.

The Minister of Food and Agriculture, Dr Owusu Afriyie Akoto, who represented the President, congratulated the graduates for their hard work and achievement in the academic field and further urged them to contribute meaningfully to the socio-economic development of the country.