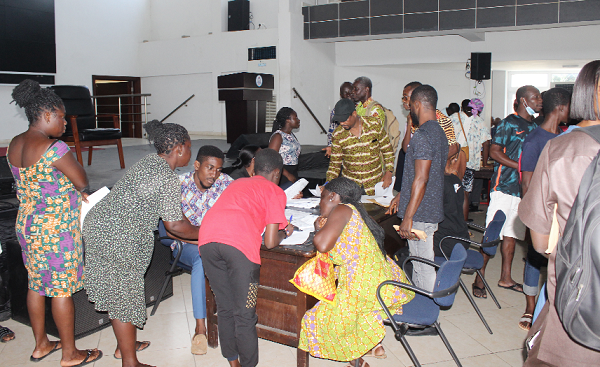 Some parents going through the placement process at the GNAT Hall. Picture: ERNEST KODZI Follow @Graphicgh

A resolution centre set up by the Ghana Education Service to handle complaints concerning the Computerised School Selection and Placement System has resolved about 7,000 complaints across the country.

About 4,000 of the cases were resolved in Accra on matters of placements and the correction of errors regarding the gender of students, boarding and day facilities, as well as the age of students.

The Deputy Coordinator of the Free Senior High School Secretariat, Nana Afrah Sika Mensah, told the Daily Graphic last Tuesday that the process had been smooth so far.

Nana Mensah said even though some parents and guardians continued to visit the centre, it was mainly because their contacts were not reliable to have them informed about the resolution of their children or wards’ issues.

Indeed, officials said issues for which most of the parents and guardians had come to the centre had already been resolved.

Generally, the usually long winding queues at the centre had reduced by a big margin, with officials collecting contacts and other relevant details from parents and guardians in order to reach them when the issues were resolved.

The Head of Corporate Affairs of the Technical and Vocational Education and Training, Mantse Akwetey, said the process was simple at the centre.

“There are about seven officials here taking people’s complaints. People come here for enquires, so officials take time to explain issues thoroughly for them to understand,” he explained.

He said students who had day but wanted boarding would be given their preferred choice if the placement system showed that there was vacancy when they came for the self-placement.

Mr Akwetey stated that some schools were full and so parents and their wards should exercise patience, stressing that they would be placed in a school that suited their wards’ grades.

“If we also scan through our system and realise that the boarding or day school you want is full, we will let you know and give you alternatives. If you are interested, you don’t need to pay for anything,” he added.

He lamented the activities of some persons who had taken advantage of parents’ desperation to send their children to school and taken money from them to help them.

“We know there are people who are taking advantage of the situation, and take money from people. Trust the process. The Ministry of Education aims at making sure that every child goes to school. That’s why we have been here for the past three weeks,” Mr Akwetey said.

He added that there were vacancies in schools far more than the number of students who applied for school this year.

About 600,000 spaces remained available for students, he said attributing the slow process to the huge number of people coming in for self-placement.

Mr Akwetey assured parents and students that “every child will go to school; no single child will be left in the house”.