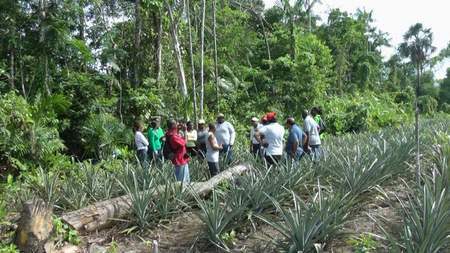 Finatrade Foundation, the charity wing of the Finatrade Group of Companies, has made available GH¢200,000 for the development of agricultural studies in two public universities.

The amount would be used for the development and expansion of already existing model farms of the University of Ghana, Legon and the Kwame Nkrumah University of Science and Technology.

The model farms were initiated five years ago through the instrumentality of the foundation.

Mr John Awuni, Corporate Affairs Director of Finatrade Group of Companies, made this known when he interacted with beneficiaries of Finatrade Foundation scholarships at the University of Ghana, Legon, yesterday.

The students are pursuing four-year programmes in Agriculture at the university.


The model farms are managed by the departments of Agriculture of the two universities. They are into poultry, crop, horticulture, and livestock, among others. Since its establishment, the foundation has sponsored close to 200 students for their four-year degrees and Master’s programmes in Agriculture in the four public universities.

Mr Awuni said the amount was to assist the schools to offer practical agricultural teaching and learning for the students and ensure that the farms operated all-year round.

“It is expected that the students will develop practical agricultural expertise and business skills through applied learning on the farms. This we hope will prepare them to be able to start and manage their own farms after school and reduce the teeming number of graduate unemployment, as well as increase production of agriculture produce,” Mr Awuni added.

After their studies, students who will exhibit serious interest in establishing their own farms will be assisted by the foundation to secure venture capital in that direction.

Mr Awuni, who later presented the students with motivational books, urged the Finatrade scholars to form an association to seek their interest and establish constant link with the foundation and the leadership of the university.

Interacting with the Finatrade Scholars, the Co-ordinator of the foundation, Mr Selorm Amevor, expressed worry about the lackadaisical attitude of the students towards the model farms and the work of the foundation and urged them to be serious with their studies.