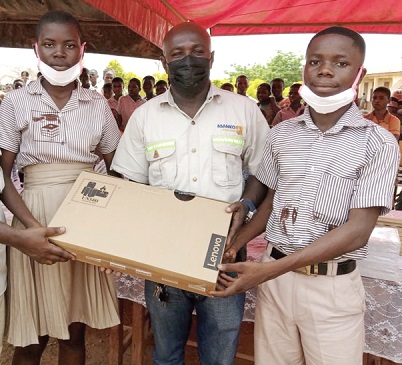 A literacy project introduced by mining firm, Asanko Gold Ghana Limited, in conjunction with Canadian Organisation for Development through Education (CODE), and the Ghana Book Trust some six years ago, appears to have yielded tremendous results.

This is by turning the fortunes of students in rural communities around with an enhanced reading culture demonstrated by a thrilling contest among schools from Amansie South District of the Ashanti Region.

From their initial inability to pronounce words properly to lack of confidence and the art of public speaking, the students swept officials off their feet with an unimaginable exhibition of confidence and finesse in their delivery at Manso Abiram in the Amansie South District.

Kumpese Akwasiso D/A, one of the thriving schools in the areas, lived up to the billing grabbing the topmost prize at the JHS level and finished second at the primary level.

They competed in spelling of words, pronunciation, answering questions from a prescribed reading book, reading and a test of their vocabulary.

Dora Addai and Abdul Fuseni Ganin won it for Koninase Nkran while Paul Mensah and Mercy Aniwaa Kyei won it for Kumpese.

The literacy project, which is in its final year per the agreement with CODE, covers Amansie West and South, as well as the Atwima Nwabiagye districts of the Ashanti Region.

The competition is expected to be replicated across all the catchment areas where Asanko operates as it seeks to negotiate for an extension.

In a way to motivate the students, the Executive Vice-President and Managing Director (MD) of Asanko, Mr Frederick Attakumah, doled out a personal laptop to Kumpese Akwasiso for winning the JHS contest.

Each participating school also took home 100 exercise books each with boxes of pens, as well as a certificate of participation.

The Unit Manager, Land Access and Social Investment of Asanko, Mr Kwabena Kwaakye, said the competitions were meant to evaluate the project and have a better appreciation and feedback from both students and community leaders.

He said so far 12,000 reading materials had been distributed to schools since the programme started covering 40 schools in five cohorts.

Asanko and CODE have furnished about 20 school and community libraries with furniture and has also trained about 150 librarians and teachers who in turn have trained a number of their colleagues.

The Executive Director of the Ghana Book Trust (GBT), Ms Genevieve Eba Polley, said reading was crucial to the overall development of any human being and it was even more important to students because reading and writing formed the basis of their advancement.

She expressed the hope that the programme would be sustained “because what I have seen today has amazed me”.