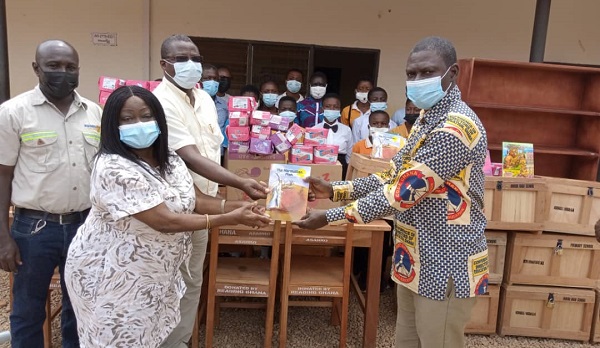 Madam Aba-Polley together with the Sustainability Manager of Asanko, Mr Rammy Oboro and Mr Isaac Kwabena Kwaakye (behind the two) presenting the reading materials to the district director of education, Mr Darko

From as low as a 30 per cent pass rate, basic schools in the Amansie West and South are recording dramatic improvement in their BECE results between 65 per cent and 95 per cent in the last two years.

Beyond that, some alumni from schools in those areas have found themselves in some top secondary schools in the Ashanti region including Prempeh College and Opoku Ware, which hitherto was not the case.

The project which is in its final year, with anticipation of a possible renewal, was supposed to have ended last year but was extended to this year due to the COVID-19 pandemic. 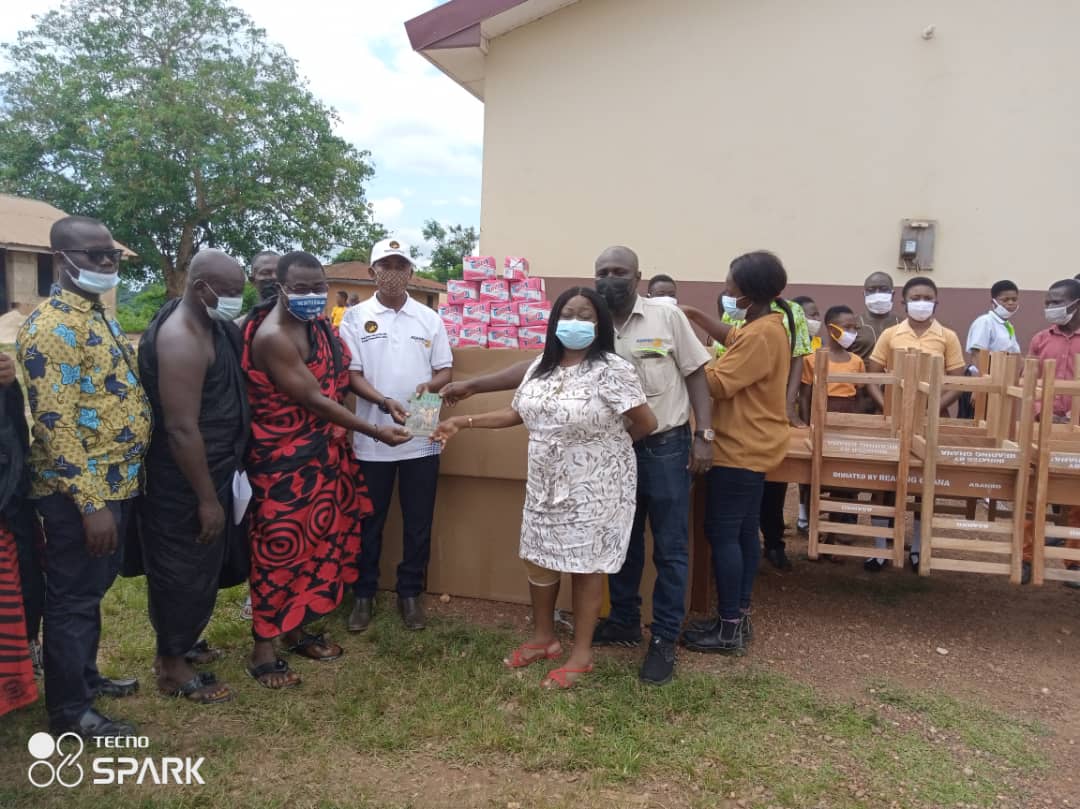 Six years ago, Asanko and CODE each contributed 600,000 Canadian dollars towards the literacy project in the two districts to help prop up the reading culture among students, build their confidence and improve academic performance.

The project includes the provision of reading materials, training of more than 300 teachers and organising competitions and debates to build students confidence. It is being implemented by the Ghana Book Trust.

Mr Darko announced that the results at the last year's BECE were very refreshing, recording an average of 95 per cent pass rate, expressing hope that if the exercise was not stalled, schools in the area could hit a 100 per cent pass rate in the near future.

Mr Darko broke the good news at the Koninase- Nkran D/A Primary School when Asanko and CODE presented boxes of reading materials to the school and also stock their library.

The two companies also presented similar materials to Manso Abiram plus a number of sanitary pads to girls, all in the Amansie South district.

Ten basic schools in the district benefitted from the donation on Wednesday.

In all, 50 basic schools have benefitted from the six-year project from five cohorts.

Each cohort is made up of 10 basic schools.

The Unit Manager, Land Access, Asanko, Isaac Kwabena Kwaakye, who stood in for the Sustainability Manager of the company, Rammy Oboro, said the investment in the students was Asanko's contribution towards preparing them to be able to compete favourably for a space in the mines in future.

He said investing the students had shown that when a group of people are confident and know what they are about, they can match up to anyone - either locally or internationally.

The Executive Director, Ghana Book Trust, Genevieve Aba-Polley, said in addition to the project, a mobile library clinic from Ghana Library Board has also been rolled out to cover other remote areas.

"Who would have thought that a student from here would have ever made it to Opoku Ware or Prempeh. It tells you the project is good and needs to be sustained".

CODE is Canada's leading international development agency uniquely focused on advancing literacy and education in some of the world's regions in greatest need.

By acting to establish and ignite engaging learning environments through the development and publishing of locally-authored and designed children books, training teachers and teacher-librarians, resourcing libraries as well as distributing significant numbers of high-quality reading materials.

It focuses on inspiring young minds to improve their literacy and comprehension with the hope that they become critical thinkers and life-long learners.