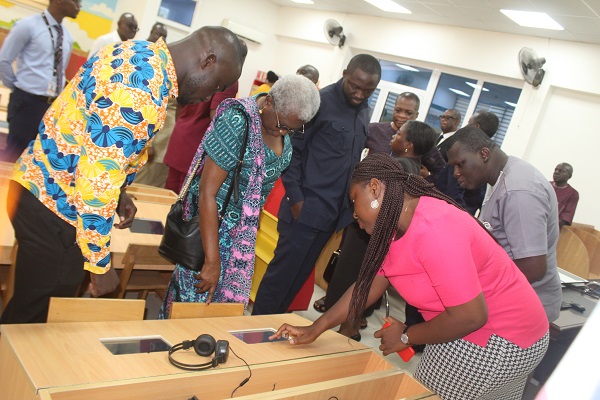 Elizabeth Ohene (2nd from left), Chairman of Board of Trustees, SSNIT, observing how the e-tablet woks in the Children and Mobile Library. Picture: ESTHER ADJORKOR ADJEI
30.5k Shares

The Social Security and National Insurance Trust (SSNIT) inaugurated a modern Children and Mobile Library in Accra on Thursday, October 20, 2022.

The $3.2-million facility, which is located at the Airport Residential Area, near Gold House, is the first of its kind in West Africa.

The 160-seater library has over 22,000 books and comes with disability assistive facilities and devices mainly for the visually impaired.

The physical infrastructure of the library project, which was started in 2016 and completed in 2020 became a source of controversy for its long period of idleness, also has an early childhood development section for children between the ages of four and five years, a section for children aged six to 12 years and a teenagers’ section.

They are all equipped with physical books, e-books and audiovisual materials.

Additionally, the facility has a media review room to showcase educational materials, a technology hub which would be used to train people in information and communications technology (ICT), a print/copy centre and a conference room for public use.

Speaking at the handover ceremony, the Director-General of SSNIT, Dr John Ofori-Tenkorang, said the facility was expected to serve as a resource base for children and teachers in the immediate community and beyond.

He added that the facility would also promote reading, computer literacy and creativity among children in the country as they were considered future workers and employers.

The Board Chair of SSNIT, Elizabeth Ohene, handed over the keys and the totem of the library with support from the Director of Pre-tertiary Education at the Ministry of Education, Nana Baffour Awuah, and Dr Ofori-Tenkorang.

“This is a gift from the pensioners of Ghana to the children of Ghana,” Ms Ohene declared.

Mr Awuah, for his part, commended the board and management of SSNIT for putting up "this monumental edifice”.

He urged the GLA to manage the library efficiently so that it could serve not only the surrounding communities but the country as a whole.

"The ministry will continue to offer every support to ensure that the quality of the library is maintained," he added.

The Chief Executive of GLA, Hayford Siaw, who received the keys and totem to the library, said although there were 61 libraries as at 2016, the number had increased to 114 currently.

That, he said, meant that "the culture of reading, the establishment and expansion of the footprint of libraries across the country had not been the focus of policy when it comes to education.

Mr Siaw stated that recent reports by the Ghana Statistical Service showed that literacy rate in the country was around 69 per cent which was below the global average of 86 per cent.

The GLA chief executive said it meant that there was a lot of work to be done to ensure that Ghanaians acquired the skills and ability to read and write.

"We can only be able to do that if we upgrade some systemic challenges which is to expand access to public libraries and support the establishment of school libraries," he said.
Furthermore, Mr Siaw announced that the government was committed to establishing 540 libraries across the country by 2030.

"So from 2018 to now, the Ghana Library Authority has been on an agenda to expand access to public libraries in the country".