Why the rise in single life? 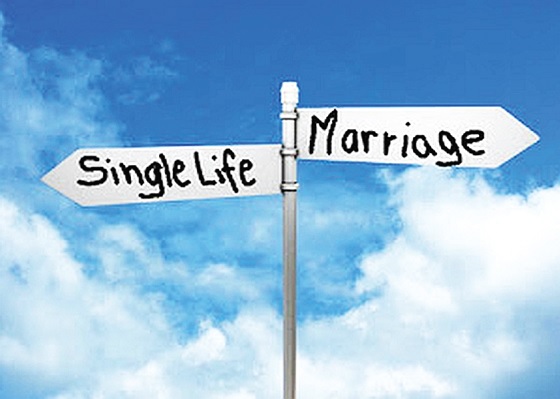 Some stay single out of choice because it is more convenient for their life ambitions.
30.5k Shares

In the Ghanaian culture and tradition, the main focus in life is to marry, have children and raise a family to preserve the human race.

Marriage is therefore a sacred duty and all adults are expected to marry.

Adults in Ghana who marry are respected.

In fact, in the past, the higher the number of wives you had the greater the respect you gained in society.

On the other hand, singles were looked down on.

In fact, "sugyani," the Akan word for bachelor, means a man who fetches firewood to cook.

In the Ghanaian tradition, cooking is a woman’s responsibility.

A man who cooks because he is single has little respect because he is assumed to have committed a major social offence of terminating his lineage.

The situation is not so today.

Global studies show that while marriage is falling, single life is rising at a fast rate.

For example, global studies show the proportion of people in a single life has doubled in the last 20 years.

It is also estimated that Scandinavian countries and Japan have higher figures of singles.

Again it is known that globally, 4.3 per cent of women never get married (14 per cent in Australia, 10 per cent in Europe and 6.1 per cent in Sub-Saharan Africa).

Why single life?
Most adults in Ghana are single due to circumstances beyond their control.

The cost of living is very high and in Ghana many are poor.

In fact, a study showed that in 2018 the Ghana poverty rate was 56.30 per cent, meaning they can’t afford to spend five cedis a day.

Again, a study shows that today only five per cent of Ghanaians earn more than GH¢5,000 a month.

Many stay away from marriage rites, accommodation and maintenance of children.

It is also known that while some women are never asked to marry, some men claim not to have found suitable partners.

Loss of spouses and increasing rate of divorce also contribute to high levels of single life.

Some stay single out of choice because it is more convenient for them for their life ambitions.

Some have gone through bad marriages and are afraid of subsequent failures.

What can be attractive about a marriage institution that has a 60 per cent failure rate?

For some, it is better to be single than be unhappy in marriage.

Some stay single out of selfishness.

They have worked hard for their money and properties.

The thought of someone coming in to enjoy their wealth and possibly take over their properties scare them from marriage.

Some are born celibates.

They have no desire for sex and have emotional problems that make it hard for them to relate to the opposite sex.

We also have a cultural shift due to foreign influences and lifestyle.

Gone were the days when women met and talked about men, relationships and children.

Today they talk about accomplishments, life goals and work.

Being married or not doesn’t appear to matter.

It is now strictly cash, what you have and can do.

Some advantages of single life
Single life gives you more freedom and independence.

You live your life on your own terms without putting the key to your happiness in someone’s pocket because it could be dangerous.

You answer or consult no one on important decisions.

You get what you want, go where you want and get to bed when you want to.

You also have more control over your time and, therefore, have time to better manage yourself.

It is significant to observe that most women who are successful and high achievers in all areas of life including business, politics and academics are single because they have the opportunity to use their talents and gifts fully.

Single adults also have control over their finances.

A single adult does not have to tolerate another person’s bad habits for life.

He or she can, therefore, stabilise his or her emotions as he or she doesn’t have to act to impress his or her partner.

Some also argue that they can get whatever marriage offers like sex and children without marrying so they will not buy a cow and worry about its maintenance when they can get free milk!

Some disadvantages of single life
Single life has loneliness.

Socially, loneliness makes it hard for one to interact with other people.

It predisposes you to cancer, obesity, cardiovascular diseases, stroke, diabetics and high blood pressure which affects a third of all Ghanaian adults.

Loneliness is equivalent to smoking 15 sticks of cigarettes a day.

Studies also show chronic loneliness can reduce life expectancy by as much as 30 years.

It is said to be the most terrible poverty.

Mentally, loneliness predisposes you to self-pity and gives you a feeling that everything around you is irrelevant to your emotional needs.

You feel empty, unwanted, isolated, not listened to or understood and drained.

You have decreased memory and you are predisposed to substance abuse.

We always have drawbacks if we don’t have someone special to share in the things of life.

The thought that someone loves you and will give you companionship and support is motivating.

Single life is also expensive as one has to bear all costs alone.

The lack of lifetime commitment for stability, unity and trust makes many singles self-centred and this affects social relationships.

Completeness and self-sufficiency in single life will always remain a myth because no human effort can ever defeat our Maker’s plan for mankind.

A man must leave his family, be united with his wife and become one flesh.

When our Maker said it wasn’t good for man to be alone, He meant just that.

Marriage is our Maker’s call to bless us in unique ways.

It is good and honourable.

As far as possible, stay married and stay blessed.

The writer's E-mail: This email address is being protected from spambots. You need JavaScript enabled to view it.
0208181861