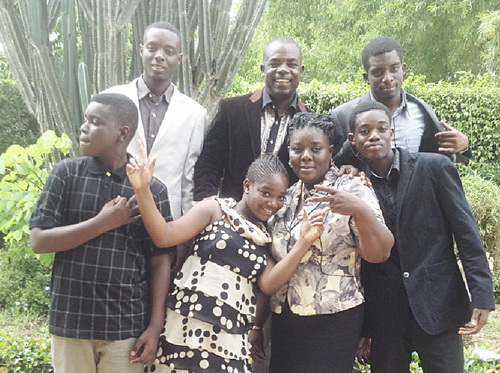 The desire of Mr Eric Ebo Acquah, Chief Executive Officer of Blue Rose Limited, an estate developer, is to provide quality affordable housing units for middle level workers not only in Ghana, but in the sub-region.
And this man has been committed to rolling out 1,000 units of detached and semi-detached two-bedroom houses and three-bedroom houses at Kasoa and Budumburam in the Central Region.

The well-demarcated estates, located at various places within Kasoa and its environs, are linked up with the various utility providers, with spaces for facilities such as markets, churches, playgrounds, supermarkets, schools, libraries, hospitals and hotels, among others.

The various sites have been coined with names such as Blue Rose City, which is located at Budumburam; Blue Gate, Blue Top, Blue City, Little Blue and Blue Ridge Estates.

At the Blue City Estates, the company has constructed an ultra-modern sports centre to house a gym, a lawn tennis court and a restaurant.

Having met his target of 1,000 affordable houses, Mr Acquah has now turned his attention to other cities in the country to bring quality and affordable houses to the doorsteps of workers there.

Consequently, he has secured plots of lands in Tema, Takoradi and Cape Coast and is convinced that before the end of this year, his company will commence the construction of an initial 200 detached and semi-detached two and three-bedroom houses in Tema, while those in Cape Coast and Takoradi will take off early next year.

Mr Acquah explained that those cities were fast growing metropolises where housing needs were growing.

He hinted that  “all was set for the commencement of an initial 100 housing project each in Liberia and Sierra Leone by the end of this year.”

He said two financial institutions in the two countries were prepared to finance the projects after a familiarisation visit to the affordable housing units at Kasoa and Budumburam.

The CEO gave this assurance: “We promised our cherished clients of quality and that quality is a journey and not a one-stop event and we are prepared to journey on that lane. We are promising them best quality houses."

Born at Ajumako in the Central Region, Mr Acquah attended the Ajumako Eshien Primary School and later to Saltpond Methodist “B” and Abura Dunkwa Methodist School.

Recounting how he started life, Mr Acquah recalled that “after Sixth Form in 1988, I started going from house to house tendering the gardens of people in his neighbourhood, a vocation I learnt from one Mr Asante who had a flower garden around where I lived. Being a lover of flowers, I did not waste time and I started accompanying Mr Asante to his clients to do landscaping for them.”

He fell in love with the job and little wonder that he started his first flower shop at Achimota, opposite the Neoplan Station, in 1989 and later opened another one at Achimota (near the overhead) and two others at Dansoman.

“while running the flower shops, I decided to get seriously into the landscaping business and I won a number of bids to design the landscape of important places, including the Tetteh Quashie-Aviation Road, the 37 Military Hospital area, Community 10 and Ashongman Estates.”

He also worked for the Construction Pioneers (CP), SONITRA, Regimmanuel Grey, and African Concrete Products (ACP), among others.

Mr Acquah explained that he later ventured into the estate development industry when he realised that there was a high demand for decent housing by a large number of workers and other Ghanaians living outside the country, who needed to own houses in the country.

“Though it was not my original plan to enter into the estates business, I just decided to take it up to help friends and other people who genuinely need assistance in acquiring decent houses devoid of litigation,” he explained, adding that he believes that every Ghanaian deserves to own a house and live in a decent house free of litigation, especially during retirement.

“It is sad to work hard and upon retirement you still go hiring rooms from landlords who will continue to enslave you with their demands for advance payment.”

“ After a very active hardworking life, you need a stress-free life, and that is why Blue Rose entered into the estates industry,” he stressed.

“My determination to provide quality and affordable houses for middle level workers in Ghana and the sub-region has earned him a number of international and national awards.”

In 2009, Mr Acquah was honoured with the “Ghana Business and Financial Services Excellence Awards Silver Award (2009)” and in 2010, he had the “Ghana Property Award for (Mass Housing) Residential Developer of the year (2010).”

In 2012, Mr Acquah's Blue Rose was given a Gold Award in the “International Quality Crown Award 2012” in London and early the same year, he received the “Best Low Income/Affordable Residential Developer” in Africa.

Recently, he received the International Prize  for the “Best Enterprises Internationally” and also the “Best Manager of the Year 2012” from the European Business Assembly (EBA).

Touching on the awards and recognition, he said he was aware there would be more of such, giving a hint that in September this year, the company has been penciled for another international award and a national award.

Mr Acquah said he and his company were humbled and that such awards were indications that "people are watching whatever we are doing."

He said as part of its social responsibility, Blue Rose had instituted an annual visit to the Budumburam Prison Camp to support the running of the camp, an educational scholarship scheme for senior high students and another one for 50 vocational students.

“There is also an annual programme during which the company feeds widows in the community and this year, the company has struck a three-year deal with the Ghana Football Association (GFA). The company will provide a two-bedroom house for the Best Player of the Ghana’s Glo Premier League (starting from this year) for three years,” he explained

Asked whether he gets time to socialise, Mr Acquah said, “I don’t joke with my leasure times. On weekends I go to the gym and sometimes I go to the beach with my family. I like playing snooker and table tennis and so on Saturdays I spend some time playing those games.”

Mr Acquah and his family live in a four-bedroom house in the Blue Windy Ridge, one of the communities of the company.

A devout member of the Assemblies of God and a dedicated family man, Mr Acquah is married to Angela with whom he has four boys and a girl.