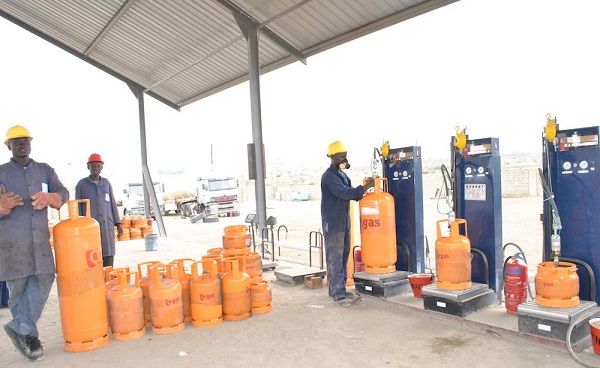 Filling LPGs to the brim can cause fire Follow @Graphicgh

The Ghana National Fire Service (GNFS) has cautioned households and vehicle owners to desist from overfilling their liquefied petroleum gas (LPG) cylinders and vehicles with gas since that could easily cause explosion and fire.

According to the service, gas cylinders and fuel tankers have been made in such a way that there should be some space left inside after filling for expansion purposes. However, some people tend to load them, filling up such space.

“Some people fill the LPG cylinder and ask the attendant to add more gas to it. It is a dangerous practice because fuel, like petrol and gases expand. So if the weather is too hot in this harmattan season and the gas expands, it gets enough space. But if you fill it to the brim and the weather is too hot, and your cylinder is old the possibility of a blast is high.

“Even though a lot of the attendants at the filling points are aware, they will add more gas if you ask them to do so because they need their money. We are in the harmattan season, and we urge everyone to be cautious,” he said.

Mr Osafo-Affum was reacting to enquiries from The Mirror on the service’s preparation towards this year’s Yuletide and how to reduce fires during and after the harmattan.

Precautionary measures
He also advised households to keep their gas cylinders in open spaces, noting that those in the kitchen should have some space to allow any leakages that may be coming from the LPG cylinders nozzle, valves or tubes to dissipate and not stay in the room as that could accumulate and cause fire outbreak.

“When you go to the filling point to fill up, make sure the washer on the cylinder is replaced to avoid leakages.

“What we have observed is that most of the washers on the market now are inferior. So if you don’t change anytime you refill, you’re posing danger to your home. This will prevent leakages on worn-out washers,” he explained.

Preparation
As part of the service’s preparation to minimise the rate of fires during the harmattan, Mr Osafo-Affum said it had rolled out intensive education campaigns including forming task forces at the regional and district levels to enforce fire safety regulations in public places including markets.

He said all regional fire commanders had been tasked to report any faulty fire engines within their areas to be repaired as soon as possible.

“In addition, all regional commanders are to recall personnel who are on their annual leave to assist due to the Yuletide and harmattan to have enough personnel to work. We are also carrying out media and community education.

“Our aim or projection for this season is to ensure that the incidence of fires is reduced by at least 20 per cent,” he added.

Electrical/electronic gadgets
He also advised against the habit of overloading electrical sockets and extension boards in order to reduce the pressure and heat on them, saying those practices could lead to fire outbreaks during the harmattan season.

On air conditioners (ACs), Mr Osafo-Affum said they were not supposed to be left on all the time, and added that it was wrong for people to cover them with curtains because they could burst into flames when they heated up.

“Television with tubes should not be placed too close to the wall in order not to catch fire when they become too hot.

“Those who do deep frying should not pour water into the oil in case there is fire to aggravate it; just cover the lid with a wet cloth,” he recommended.

Fire statistics
According to him, the total cost of damages to properties through fire outbreaks for last year was more than GH₵40 million while as of November this year, GH₵34 million had been recorded.

As of November this year, 21 lives had been lost through fires, while nine lives were lost in 2020.

But as of November this year, 5,377 fires had been recorded.

Security
Meanwhile, the Police Administration has increased the level of security during the season.

It has deployed thousands of police officers to different parts of the country to maintain law and order this Yuletide.

It has also increased day and night patrols on all roads and communities to ensure that people celebrated the season in peace.