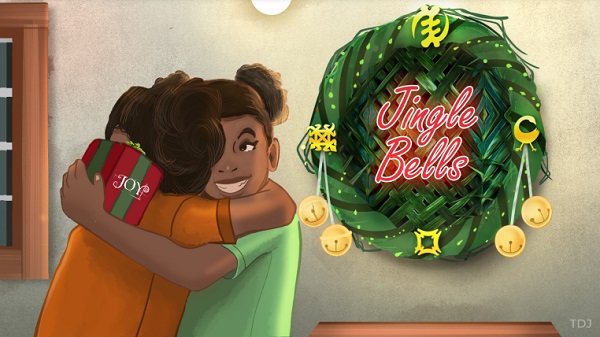 Jingle bells, Jingle bells everyone going up and down to find a perfect gift for his or her loved one. Maame Yaa and her mother were returning from shopping. They were so excited about the celebration of Christmas.

“Mom where should we spend our Christmas holidays this year?" Maame asked.

“We will go to Golden Hotel it is a very nice place at Achimota in Accra so get ready we leave this afternoon.” Maame’s mother told her “Cape-Coast to Accra?" asked Maame.

“Oh yes. Do not worry. It will be fun.” Maame’s Mother told her.

At 1:30pm Maame Yaa and her mother started packing their things.

“Yaa do not forget your swimming costume.” reminded Maame’s mother.

At exactly 3:00 pm Maame Yaa and her mother took a taxi to the bus station.

“Yes, they are very big. They are of different colours too. Said Maame’s mother.

They went to the ticket stand, paid and got two tickets. They boarded the V.I.P. bus to Accra. It took four whole hours before they reached their destination.

They took a taxi straight to the Golden Hotel.

“Mummy, this is a big place.” Maame observed.

“Yes, it is. Hurry, your Aunty is waiting for us inside.” said Maame’s mother excitedly.

“You never told me that I had an Aunty in Accra.” replied Maame.

When they went inside, they were amazed. Everything looked nice and posh.

“Mummy where is my aunty?" Maame asked anxiously.

“She is over there at the reception.” responded her mother.

The name of Maame Yaa’s Aunt is Georgina, but most call her Jojo affectionately.

When Aunty Jojo saw them, she was very excited.

“Sister! I am so happy to see you, oh, you must be my niece Maame Yaa. I am your Aunty Jojo." She introduced herself with a hug.

Aunty Jojo gave Maame and her mother their room key and number. The number of their room was 201.

“Aunty Jojo is very kind.” Maame said to her mom.

“That’s how she been since she was a child”. Maame’s mother told her.

The room was very beautiful. It had twin beds, a sitting area, a television, a toilet and bath. Maame Yaa was impressed but she couldn’t quite tell the colour of the room.

“Wow! this is a very lovely room mummy.

”Yes, a good choice and a lovely one too." agreed Maame’s mother.

They unpacked their bags, washed and settled down at the sitting area to watching Tv. But after a few minutes Maame and her mother decided to go to the mall for a stroll as they had sat on the bus for so long.

Achimota mall was not far from the Golden hotel, so they walked, hand in hand.

At the mall a Christmas Carol was playing, and everyone could hear it. There were Christmas decorations with pretty multi-coloured lights all over. The mall had a theatre, food court, hair saloon, lots of shops and supermarkets. They entered one of the supermarkets first.

“Mummy why don’t we go to where the fruits are?" Maame suggested.

On the fruit shelves were apples, watermelons pineapples, oranges, mangoes, grapes and many other kinds.

As they were looking to decide which fruit to buy Maame Yaa saw a girl mopping the floor crying.

Maame felt sad so she walked to the crying girl and asked.

“Please what's your name? Why are you crying my friend?"

“My name is Daniella and I need help” the crying girl replied.

“What do you mean by that?" Maame asked.

“My mother is a drunkard. She has given me to a man who works in the mall in exchange for dresses and money” Daniella explained.

Daniella’s mother who is an alcoholic with health issues makes Daniella work very hard and beats her up when Daniella is too tired to work anymore.

The man Daniella works for maltreats her too. He promised to take Daniella to a preparatory school, but he has not. Instead, he makes her come to work at the mall cleaning around.

After Maame Yaa talked with Daniella for some minutes she realized that she has left her mother behind so looked to find her.

“Where did you go?" Maame’s mother asked.

“I saw a girl crying. It made me sad, so I went to ask her why." Maame told her mother.

But Mamme Yaa was very worried. She could not put the girl out of her mind.

After the shopping was done, they walked back to the Golden hotel.

When they settled down, Maame asked her mother, “Mummy is it good to be a drunkard?"

“The girl I met at the mall crying told me her mother is a drunkard and has given her to a man who works at the mall in exchange for dresses and money." Maame told her mom.

“What? Did she tell you her name?" asked Maame’s mother.

“Yes, she did. Her name is Daniella." Maame replied.

“Can we help her?" Maame pleaded with her mother.

Just then, they heard a knock on the door,

“Mummy, should I open the door?" Maame asked.

“No. Wait and let me open it myself.” Maame’s mother responded.

When Maame Yaa's mother open the door, it was Aunty Jojo.

“Sister, how are you?" Aunty Jojo wanted to know.

“Aren’t you supposed to be on duty? Maame’s mother asked.

“I took a break, so I decided to come check on you.” said Aunty Jojo.

Aunty Jojo noticed Maame Yaa, and her mother were not cheerful.

“We want to help a girl who works at the mall.” Maame’s mother told her.

“Do you mean Daniella? She is a very good girl, but her father is very wicked. He does not take care of her.” said Auntie Jojo.

“How did you know Aunty?” Maame Yaa asked in surprise.

“Everybody who works here at the Hotel knows her.” said Aunty Jojo.

“She told me she needs help." Said Maame.

“What do you mean?" Aunty Jojo asked.

Maame Yaa and her mother told Aunty Jojo the whole story of Daniella.

“We must help her.” Aunty Jojo agreed.

"Let's go to bed. We shall think of how in the morning." Aunty Jojo said and bid Maame Yaa and her mother good night.

When Maame Yaa went to lie down in bed, she could not sleep right away so she prayed for God to help them help Daniella. After praying she closed her eyes and slept.

Aunty Jojo came up to see Maame and her mother after breakfast the next morning, so they find a way to help Daniella.

“First we report to the police.” Maame’s Mother suggested.

So Maame Yaa's mother and Aunty Jojo went to the nearby police station to make a report. Maame waited in their room at the Goden hotel and said another prayer.

Her Aunty Jojo went to look for the man who has been taking care of Daniella.

Luckily for them they were able to find Daniella’s mother.

Maame’s mother and Daniella’s Mother had a conversation. Maame's mother adviced Daniella’s mother not to drink alcohol again. Daniella's mother agreed to get help so she can stop drinking.

The police arrested the man who maltreats Daniella, and she was given back to her mother.

"Back at the Golden hotel” Daniella said,

"Thank you Maame Yaa." “Do not worry” Maame Yaa replied with a big smile.

Later Maame’s mother booked a room for Daniella and her mother to spend their Christmas holidays. After spending their holidays, Daniella’s mother went on treatment so that she will stop drinking.

The relationship between Daniella and Mamme Yaa grew stronger, so did that of their mothers.

Just as Santa Claus jumps down to every chimney to give a child a gift or grant their wishes or desires. That’s the same way every child should be treated. We shouldn’t discriminate on any child due to their colours, disability, age or ethnicity.

At Christmas time, Maame Yaa showed her love to Daniella so she will be free from child labour and now she is living her life like every child must live. Let’s celebrate this Christmas with love and let all children persevere.

2nd Runner up and Winner of the Frederick Ato Armah Special Prize for Outstanding Imagination.