When did dentistry begin? 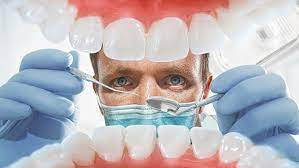 When you have a toothache, or any problem with your teeth, you want something done about it quickly! Well, ancient man felt very much the same about it. So dentistry developed practically at the beginning of man's civilization. There have been dentists for as long as there have been doctors!

In fact, documents have been found from an ancient civilization which gave 52 rules for the care of the teeth, including how to bleach discolored teeth and how to prevent bad breath.
Of course, in ancient times, there was not too much knowledge concerning the teeth and how to treat them. In ancient Greece, about 2,500 years ago, there were "dentists" who extracted teeth! But they usually pulled out only loose teeth, and until about A.D. 1400, only loose teeth were extracted. As better instruments were developed, other teeth were extracted, too.
In ancient times, they didn't know what to do about toothache. In Greece, when children were teething, they were given drugs to dull the pain. As recently as 200 years ago dentists used to put a red-hot knife into the gums to help a toothache!
Cavities in teeth were first filled about the time of the Middle Ages. The fillings were made of waxes and gums. Later on, metals, especially lead and gold, were used. They were in the form of leaf, so they could be manipulated by the dentist to fit the cavity.
The modern toothbrush, by the way, was not invented until 1498. At that time, a Chinese dentist" developed such a brush for the royal family to use.
A little over 100 years ago, all a person had to do to become a dentist was to serve as an apprentice to a practicing dentist. But in 1840, the first college for the education of dentists was established: the Baltimore College of Dental Surgery. This was the beginning of dentistry as a profession.

Today, a person who wants to be a dentist must spend three to four years in college as a pre-dental student, and then attend a dental school for four years!