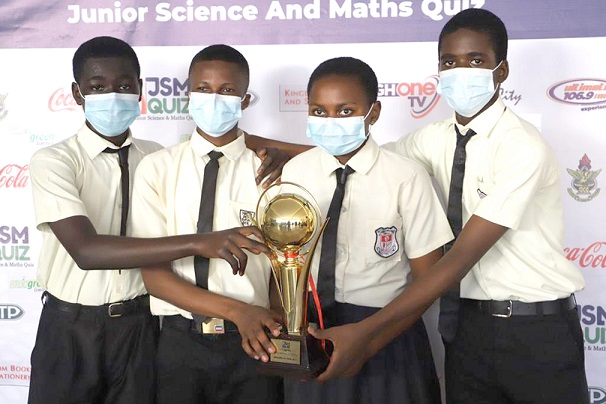 Matta Devi Basic School has won the second edition of the Junior Science and Mathematics Quiz organised by the Kwame Nkrumah University of Science and Technology (KNUST) to whip up the interest of junior high school students in the subjects.

Aside from the ultimate trophy, Mata Devi received a cash prize GH¢ 3,000, while the second and third winners received GH¢2,000 and GH¢1,000 respectively.

The contestants of the three schools received a laptop computer each.

Two teachers from the Matta Devi Basic School and a teacher from KNUST Basic School received a laptop each, for their supervisory roles that made the schools excel in the contest.

In all, 36 basic schools in Greater Kumasi were selected to battle it out in this year’s competition.

It was in collaboration with the Ghana Education Service (GES), and supported by Ultimate FM and GHOne TV, GTP, Kingdom Books and Stationery and Coca Cola.

At the grand finale, the Provost of the College of Health Sciences, Prof. Leonard Kofitse Amekudzi, said plans were far advanced to make next year’s contest nationwide, and that the modalities would soon be made public.