Do you know elephants stand to sleep? 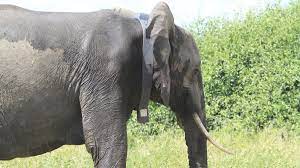 Elephants mostly stand while sleeping, but they will lie, but not for longer than an hour usually.

The reason is because their own body weight will crush their internal organs, so lying down for longer, would slowly cause their organs to be crushed. So, like horses, they sleep standing.
In general, elephants will sleep a maximum of four hours per day/night. They won’t sleep at a stretch just like that of other domestic animals like dog. They will sleep for about 30 minutes and then get up and feed on grasses and then again they will go to sleep. But they will lie down for 30 minutes on left side followed by right side on next 30 minutes. They repeat this cycle until they get about four hours of sleep.
Elephants also live in herds it varies from ten or twenty animals to fifty or more, most of whom are related.
The leader of the herd is usually a wise old cow, or female elephant. Most of her followers are females with young ones in various stages of growth. When two or more bulls join the herd at the same time, they are likely to fight each other, one would drive they other away, or even kill it.
The herd wanders far and wide, during the dry season they migrate into forests or stay close to a good supply of water.
The daily life of an elephant herd often follows a routine, in the morning hours the animals may travel to a nearby river. There they drink and bathe. After bathing, they feed on trees and other plants for several hours then they pause in some shady area for midday rest.
They may feed far into the night before taking another rest period. Some lie down to sleep, but many adults, especially among African elephants sleep standing up.

A book titled More Tell me Why