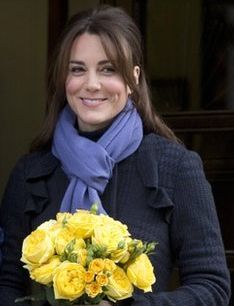 The Duchess of Cambridge has left hospital after several days of treatment for acute morning sickness.

Less than 12 weeks pregnant, she was admitted with acute morning sickness - hyperemesis gravidarum - on Monday.

St James's Palace said in a statement that she was now heading to Kensington Palace for a period of rest.

Her first child will be third in line to the throne, and will become monarch, whether a boy or a girl, after changes to the succession rules.

This week the Commonwealth governments agreed to press ahead with a bill ending discrimination against women in the succession to the British throne.

Catherine smiled at the media, which have been assembled outside since her admission, when she emerged from the hospital.

She nodded when asked by reporters if she was feeling better.

A public announcement of the duchess' pregnancy, before the usual three-month mark, was prompted by her medical condition.

St James's Palace added: "Their Royal Highnesses would like to thank the staff at the hospital for the care and treatment the duchess has received."

Catherine's discharge from hospital comes the day after it emerged that two Australian radio DJs impersonated the Queen and the Prince of Wales to dupe hospital staff into giving an update on the duchess's condition.

The hospital said confidentiality was taken seriously and telephone protocols are under review.

2Day FM said it was surprised their call was put through but "sincerely apologises".

The Australian Communications and Media Authority said it has received complaints about the prank call.

The privacy provisions of the commercial radio codes of practice apply to news and current affairs programmes, it said, but added that it had no further comment to make.

Catherine is not expected to attend any scheduled engagements for the time being, but Prince William will continue with his royal duties, including two events at the weekend. - BBC