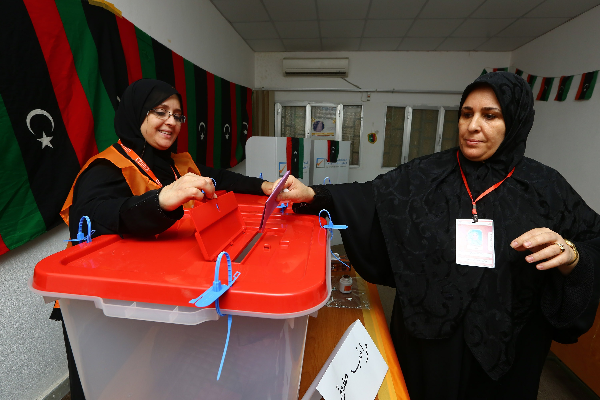 Libyans were scheduled to head to the polls last December for a presidential election that had long been marred by mounting challenges and disputes over rules and regulations.

After months of uncertainty, Libya’s electoral commission suggested the polls be pushed back by a month, as a parliamentary committee tasked with overseeing the process said it was impossible to hold the vote as originally planned.

The country’s inability to hold its first-ever presidential election came as a surprise to many, especially international bodies that had put in measures to ensure the elections could be executed in December.

The challenges facing the elections include bitter disputes over the laws governing the electoral process and occasional infighting among armed groups. Controversial figures declaring runs for the presidency have further polarised the political scene in recent months. Among them are Khalifa Haftar, a renegade military commander whose eastern-based forces waged a destructive 14-month offensive on Tripoli that ended last year, is rejected as a possible president by various armed factions and many people in western Libya, Saif al-Islam Gadhafi, the ousted dictator's son and one-time heir apparent and interim Prime Minister, Abdul Hamid Dbeibah.

The interim Prime Minister had promised not to stand for election as a condition for taking on a caretaker role earlier this year while other candidates say his presence on the ballot is unfair. For him to be eligible, Dbeibah would have needed to have suspended himself from governmental duties at least three months before the polling date, which he did not do.

Without clear agreement on the rules, let alone on who would enforce them or adjudicate disputes, the electoral commission, the parliament’s election committee and the fragmented judiciary were unable to agree on a final list of eligible candidates.Most of Libya is controlled by armed forces that back rival candidates. Without extensive independent monitoring, there would likely be claims of fraud or voter intimidation. A disputed result could rapidly undo the peace process, replicating the aftermath of a 2014 election when warring factions backed rival administrations.

The vote's delay also threatens to open a power vacuum. Lawmakers have argued that the mandate of Dbeibah's government ended on December 24. A legislative committee for the election suggested restructuring the interim government to "achieve stability." But a UN adviser called on the parliament to focus on delivering the vote rather than appointing a new transitional administration.

Libya has been in turmoil since long-serving ruler Muammar Gaddafi was overthrown and killed in 2011. The UN and Western powers had hoped that the election would bolster efforts to achieve peace and democracy in Libya — a strategically important country that is a major oil producer and a transit point for migrants to Europe.

The divided political class that emerged in the wake of the 2011 NATO-backed uprising against longtime ruler Muammar Gaddafi could not agree on the rules overseeing the election.

Furthermore, they failed to reach a consensus on what powers a new president or parliament would have and who could run in the vote.

Parliament Speaker, Aguila Saleh, who is a Presidential candidate, issued a law setting a first round of the presidential election for the December 24 date, followed by a runoff vote if needed and parliamentary polls.

Putting the presidential vote first meant the election would come down to a winner-take-all contest between candidates from virulently opposing factions but other political institutions rejected the law, accusing Saleh of passing the law without any proper parliamentary process.

However, Saleh’s law formed the basis of the electoral process and disputes over it grew even more as a number of divisive candidates entered the contest. Some 98 candidates registered for the presidential race – including some who were seen as unacceptable by many in the country, including powerful armed factions.

The electoral commission has proposed a one-month delay but the parliament may seek a longer one. Negotiations are continuing among the candidates, political institutions and foreign powers.

Parliament ordered the formation of a committee to create a roadmap and submit their proposal within one week. A short delay may not be enough to resolve the arguments that derailed the December vote. However, fixing those problems could require more time, raising questions about whether the interim government could stay in place until a new election is held.

Libya is likely to conduct its general election in June after missing the December deadline to elect its first president since the 2011. UN's Special adviser on Libya, Stephanie Williams, who has been pursuing this agenda has indicated that it is still "very reasonable and possible" for the country's 2.8 million voters to cast their ballots by June in line with the UN-brokered 2020 roadmap.

She said elections were needed in the country to give credibility to the country's institutions. "All the institutions are suffering a crisis of legitimacy," she said. "I don't see any other exit for Libya other than a peaceful political process."

The country became chaotic after the NATO-backed 2011 rebellion and split into rival governments, one in the east, backed by military commander Khalifa Hifter, and another U.N.-supported administration in the capital of Tripoli, in the west.

In April 2019, Hafta and his forces, backed by Egypt and the United Arab Emirates, launched an offensive to try and capture Tripoli. His campaign collapsed after Turkey and Qatar stepped up their military support of the Tripoli government with hundreds of Turkish troops and thousands of Syrian mercenaries.

Libyan lawmakers who met in December last year to examine the issues that forced a postponement of the presidential elections recommended laying out "an applicable roadmap".