Germany floods: At least 93 dead and hundreds unaccounted for 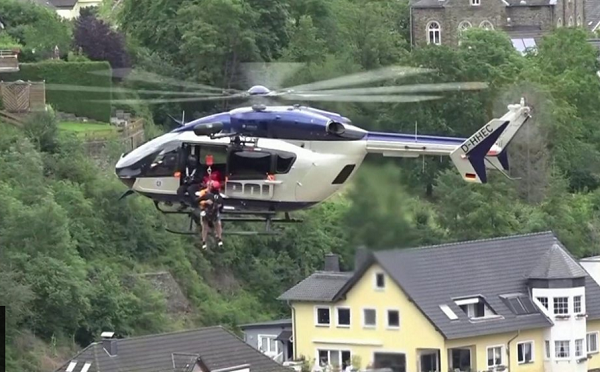 At least 93 people have died and hundreds more are unaccounted for in Germany after some of the worst flooding in decades.

Belgium has also reported at least 12 dead after the extreme weather, which political leaders have blamed on climate change.

In Germany, the states of Rhineland-Palatinate and North Rhine-Westphalia were the worst-affected.

During a visit to a hard-hit area, Armin Laschet, premier of North Rhine-Westphalia, blamed the extreme weather on global warming, saying climate protection measures must be accelerated.

Scientists have repeatedly warned that human-induced climate change would bring pulses of extreme rainfall such as this one.

The Netherlands is also badly affected, with further flooding in Luxembourg and Switzerland.

In the western German district of Ahrweiler, up to 1,300 people are unaccounted for, the authorities say. A spokeswoman for the local government said mobile networks had been put out of action, making it impossible to contact many people.

The village of Schuld (population 700) was almost entirely destroyed. A major dam near the Belgian border, the Rurtalsperre, is at capacity and overflowing slightly, officials say.

In the town of Erfstadt-Blessem, near Cologne, floodwaters caused a row of houses to collapse. Local authorities said they were receiving emergency calls from people trapped by floodwater but rescue was in many cases not possible.