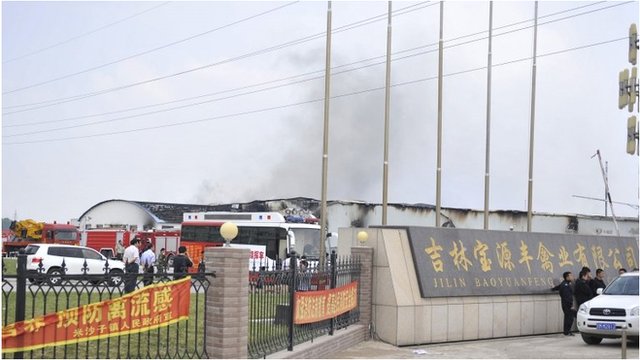 A fire at a poultry processing plant in China has killed at least 119 people, officials say.
The fire broke out at a slaughterhouse in Dehui in Jilin province early on Monday.

Accounts speak of explosions prior to the fire, which caused panic and a crush of workers trying to escape. Some exits were said to be locked.

The fire is now said to have been mostly put out and bodies are being recovered.

Sources including the provincial fire department suggest there may have been an ammonia leak which either caused the fire or made fighting the blaze more hazardous.

Other reports speak of an electrical fault.

It is China's deadliest fire since 2000, when 309 people died in a blaze in a dance hall in Luoyang, in Henan province.

About 100 workers had managed to escape from the Baoyuan plant, Xinhua said, adding that the "complicated interior structure" of the building and narrow exits had made rescue work more difficult.

It said the plant's front gate was locked when the blaze began.

The number of workers trapped inside the plant has yet to be confirmed, the agency added, and it is not clear how many workers have been accounted for. An unnamed government official told AFP news agency he expected the death toll to rise.

Dozens of injured have been sent to hospital, but the severity of their injuries remains unclear.

Pictures from the scene showed the roof mostly burned away to reveal blackened, twisted girders.

The provincial government said it sent more than 500 firefighters and at least 270 doctors and nurses to the scene, evacuating an area nearby that is home to 3,000 people as a precaution, reported Reuters news agency.

Workers interviewed by state broadcaster CCTV said the fire broke out at about 06:00 (22:00 Sunday GMT) during a shift change and may have started in a locker room.

Those who managed to escape from the factory describe panic and chaos as the lights went out, the building filled with smoke, and they found exits blocked or locked.

Guo Yan told Xinhua the emergency exit for her workstation was blocked and that she was knocked to the ground in a crush of workers trying to escape through a side door.

"I could only crawl desperately forward," said Ms Guo, 39. "I worked alongside an old lady and a young girl, but I don't know if they survived or not."

Family members were quoted as saying the factory doors were always kept locked during working hours.

An investigation into the cause of the fire is under way, Xinhua said.

The plant is owned by Jilin Baoyuanfeng Poultry Co. It was only established in 2009 and is not an old or antiquated facility.

Located around 800km (500 miles) north-east of Beijing, it employs some 1,200 people and produces some 67,000 tonnes of chicken products every year.

Chickens are slaughtered at the plant and then cut up for retail - a process that takes place in cold conditions. Ammonia is used as part of the cooling system and in such plants flammable foam insulation is commonly used to keep temperatures low.

Workplace safety standards can often be poor in China, with fatal accidents regularly reported at large factories and mines, says the BBC's John Sudworth in Shanghai.

Those lax standards are variously linked to corruption, the prioritisation of efficient production over worker safety in building design, and poor enforcement of safety rules.

Comments posted on the Chinese micro-blogging site Weibo about the fire included: