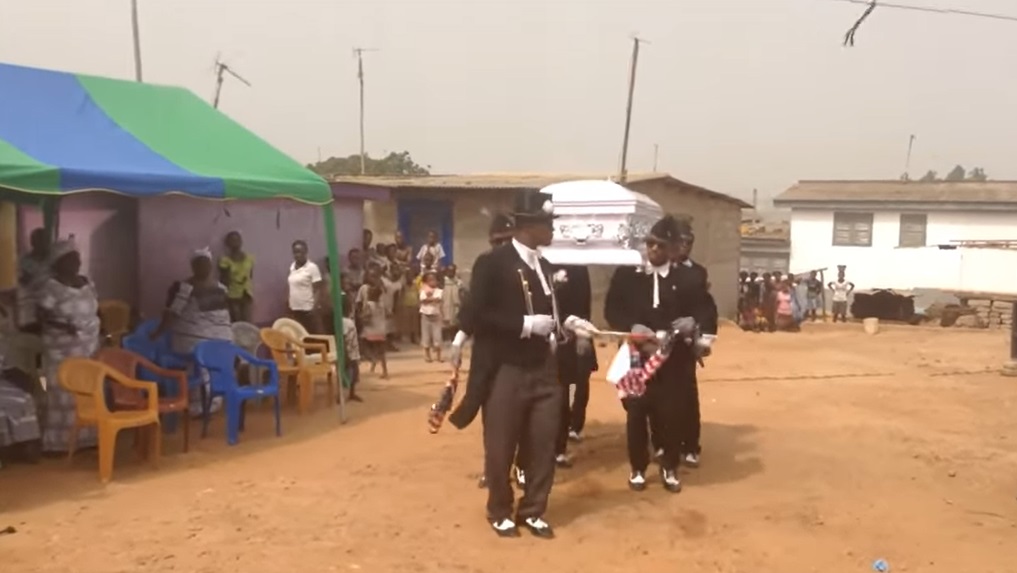 To see very young pall-bearers at work sometimes puzzles me. Whenever I see them at a funeral service, the question that comes to mind is, “what is the attraction in carrying someone’s coffin in and out of Church and into the grave”?

After all the dictionary definition of the word “pall” in itself sounds discouraging.

My Collins dictionary and thesaurus defines “pall” as cloth spread over a coffin.

Dark cloud, depressing oppressive atmosphere.....” Not very exciting meaning but young men are doing it with much fulfilment.

Until recently, pall-bearers engaged in a lot of drama.

Sometimes, the displays extended into acrobatics and dancing while the coffin rested on their shoulders.

These days, those gymnastics have changed or maybe diminished into solemnity.

They must have taken a cue after a social media video mishap of pall-bearers engaged in some agility, dancing and throwing a coffin in the air.

They missed catching the coffin as it came down.

What happened was not pleasant.

The coffin fell to the ground exposing the corpse.

During my time as a young woman, getting near a dead body laid in state or a coffin was a scary thing for me.

Entering a cemetery was a no-go.

It was so upsetting and frightful I had always thought all that was reserved only for grown-ups.

Funeral homes at the time were non-existent so family members always took charge of preparing their dead bodies from the mortuary, dressing it up and the young men among them carried the coffin into church and from there to the cemetery.

Today, almost all of that is the job of funeral homes, maybe for the convenience of it.

It marvels me to see young men, smart enough to be playing for the national football team, the Black Stars, signed on as pall-bearers.

They always paint a picture of a cool job in carrying coffins.

Is the remuneration simply good?

I just wonder how many of them are in it as full-time job and what they chat or WhatsApp each other about after work.

They come smartly and stylishly dressed in their black suits, white shirts and white gloves.

They even have leaders who come sometimes dressed in tailcoats, bowler hats and fanciful walking sticks and handkerchiefs to lead the procession.

Just compare them to the fashionable outfits of grooms men at marriage engagements and weddings and you would realise pall-bearers sometimes even can outsmart them.

So what then is the attraction for these young men to be signing on, weekend after weekend, as pall-bearers?

Last week at a funeral, I sneaked out of the Church service to speak to a pall-bearer relaxing under a tree.

I wanted to find out more about this curious job they performed.

In the short conversation, this young man of not more than 23 years called Kwesi (not his real name) told me, he does pall-bearing only on part-time basis to support his schooling.

When I pressed on to know why he could not do anything else like a part-time waiter serving drinks or water at funeral receptions other than carrying the dead, he retorted,

“Mama, every job is a job, so long as it is not robbing somebody”.

His answer left me with a lot to think about, wondering whether I was speaking to the wrong young man.

He did not see anything wrong with carrying coffins into the grave as his job, because in his own words, “the journey is all part of life”.

They see the job of carrying coffins to church and into the grave as a completion of one’s life journey on earth and it is their duty to make that journey look grand.

As well, like any paid job, it helps them keep body and soul together.

There seems to be some sense in what Kwesi told me, after all the Bible even says in 2 Thessalonians 3:10 that if a man will not work, he shall not eat.

The same Bible in Proverbs 10 says that a lazy hand makes a man poor.

Though it is not the kind of job one would expect a young man to be seen doing publicly, pall bearing seems to be attractive to those young men who engage in it.

They see it not only as a job to bring in some income, but also as some sort of satisfaction in making the journey of the dead person from this earth complete.

A thought that never came to mind.

Writer’s e-mail: This email address is being protected from spambots. You need JavaScript enabled to view it.