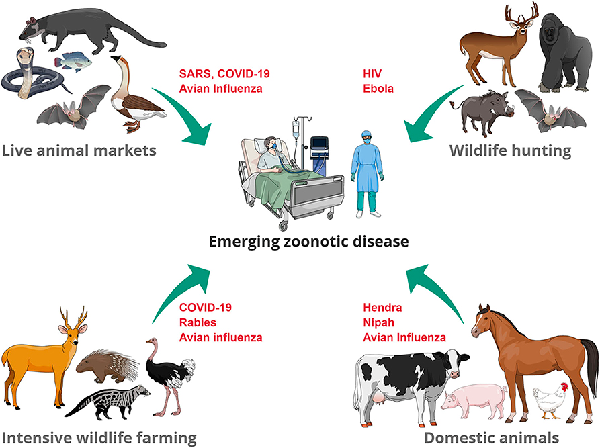 COVID-19, SARS, bovine spongiform, swine flu and avian influenza all have one thing in common: they are all zoonotic diseases, suggesting they originated from animals.

These diseases, however, do not literally "come from animals." After all, animals aren't scheming against people by tossing COVID-19 over the back fence.

When we state that this epidemic is "animal-related," we mean that the diseases are caused by the way society produces, harvests and consumes animals.

Reduced demand for animal products should be part of a comprehensive policy approach for averting the next pandemic.

Fortunately, a successful strategy does not necessitate the government telling individuals what they should and should not consume.

Many Ghanaians, like the rest of the world, are well aware of the advantages of a plant-based diet.

Government policy could be more effective if it did a better job of helping those who are already striving to make dietary changes.

Policies that improve animal health and increase food production monitoring and regulation may help to lower the danger of zoonotic infections.

Expanding scientific study into the environmental components of zoonotic diseases, as well as creating and implementing stronger biosecurity measures are some of the policy possibilities.

It advocates for legislation that improve animal health (including wildlife health services), as well as greater monitoring and regulatory capability in the food industry.

Government should also find measures to lessen their demand for animal protein, according to the paper.

Reducing meat demand isn't increasingly recognised as essential as a policy solution, partially because many people don't associate our present pandemic with the dietary pattern or agricultural sector.

Throughout time’s vicissitudes, the incidents of pandemics have been known to have originated from animal husbandry and industrial production chain.

Reference can be made to the mad cow disease (Bovine spongiform encephalopathy) outbreak in the United kingdom in the 1980s, the H5N1 (bird flu) outbreak traced to Chinese chicken factories in 1997, swine flu (H1N1) outbreak in 2009, which is known to have originated from farms in North Carolina in the United States and Mexico, the west African Ebola outbreak in 2013, though it is believed to have its earlier traces identified 1976 in parts of Central Africa, followed by the SARS-COVID 19 (corona virus), whose early cases were associated to the animal market in Wuhan, China.

Clearly, the origins of these pandemics aren’t limited to some countries or some practices.

It is imperative to note that pandemic viruses have all been realised in situations where humans and animals meet, thus rearing animals on a larger scale as food will have significant effects on our lives.

One fundamental idea that emanates from these assertions is that fact that since the dawn of time, no single recorded pandemic is known to have originated with plants or has a history that can be traced to plants.

Taking into consideration the unpredictability of the influx of pandemics, and our position to mitigate against its consequences, effectives strategies that will arouse public interest in substituting increasing need for animal food with plant food, will place us in a much advantageous position against future pandemics.

It is incumbent of policy makers to implement policies appropriate for more consumption of plant-based diet than animal-based diet, however, this may not be heralded by policy leaders as it involves changing some behavioural, patterns of people, which may in most cases be considered as not the business of policy makers or government.

However, there is a sense in which taking this into consideration of more imperative. An attention shift towards plant-based diet means cultivating more plants, which not only serves as healthy food, but also a supportive climate change agent.

In order to successfully realise that, measures can be initiated by incentivising and making plant-based farming more attractive which is evaluating food procurement and nutrition guidelines to ensure that public facilities such as schools, hospitals, jails, and industries serve a plant-based meal as a daily requirement on menus.

The government should also work to implement its own dietary guide and increase access to plant-based foods, particularly for low-income, rural and northern citizens. Foods that are good for humans and the environment must be subsidised.

It is clearly without a doubt that our dietary habits influence our environments as well as having health impacts on us.

It is thus inevitably relevant for the Ghanaian populace and policy makers to support an agenda to shift to plant-based diet, taking into consideration, the interrelationship between zoonosis and animal production.

Because if not us who and if not now, when? It is Kairos time.

The writer is a Teaching/Research Assistant,
University of Energy and Natural Resources.
P.O. Box 214, Sunyani-Ghana