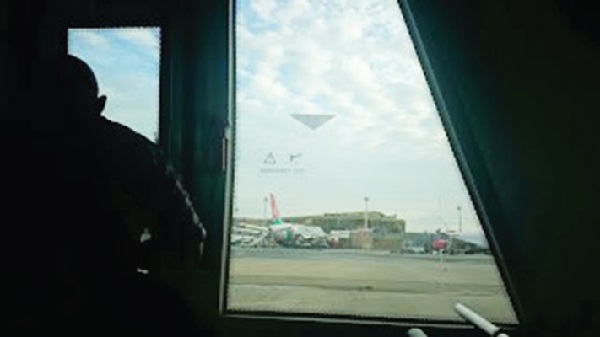 It was my most uncomfortable flight on the Boeing 737 – 800 Kenyan Airways flight from Accra to Nairobi on November 21, 2015, due to the small nature of the three-tier seats.

To add insult to injury as they say, I had to make do with a middle seat, sandwiched between a lady and a gentleman who were more endowed in size than I am.

Maybe, what came as compensation and a blessing to me was the fact that I had some more legroom than those on the other rows because I was seated on the emergency exit lane.

That, however, did not take away my discomfort throughout the six-hour flight. Although I tried to make the best of the situation by trying to catch some sleep, the size of the seat plus the fact that I couldn’t recline it as much as I could because there was someone behind me, did me in.

We finally landed at the Jomo Kenyatta International Airport, after what seemed like an endless but smooth night flight. Arrival time at the airport was approximately 7 a.m. (local time - 4 a.m. back in Ghana), having experienced a delayed take-off from Accra’s Kotoka International Airport (KIA). The only explanation passengers received from airline officials was apologies for delaying our boarding.

After I had gone through arrival formalities, I proceeded to the exit of the arrival hall, expecting to find someone waiting to pick me up to the hotel I would be lodging.

As we say, lo and behold, I couldn’t find any sign, after countless scanning of the inscriptions that were held by several welcoming parties. Frustration began to set in but I decided to hang on for a few more minutes.

The long wait and rescue

So what happens to me if no one comes for me as I was promised before heading for Nairobi, I asked myself. Someway somehow, however, I knew I would eventually arrive at my hotel, although I had no local currency or foreign currency on me.

But how could that have escaped me? It never struck me to put some foreign currency (dollars) on me. Some military and police personnel stationed at the airport approached me and attempted a rescue operation. They, however, failed because all the phone contacts I had did not go through.

At the Jomo Kenyatta Int'l Airport

An airport security official also took the list of contacts I had with me and tried to offer some assistance. It was the same story – no success in getting those contacts. He then took me to a hiring company that was stationed at the airport but the counter lady said she could not be of help if I had no ready cash on me. Nonetheless, she said my charge would be $20. What? Well, I would have agreed if I had such money on me.

So when that failed I decided to take my destiny into my own hands – look for a taxi driver who would agree to take me to the hotel and come back later for his money when I had made contact with the organisers.

I almost succeed when a cab driver I approached agreed to take me to my hotel. “Let me go back for my luggage then we will go,” I told him. I had left my luggage at the hiring company’s counter.

Talk about God’s intervention as an on-time God. Just as I turned to go, I saw this young lady holding a sign that bore the name of the organisers of the conference I was attending. I would not have seen it under normal circumstances because she had not held it up but had it in her hands together with other papers. How I saw the sign still remains a mystery to me.

Aha! I have been looking out for you since I arrived, I told the lady who later gave her name as Diana. “We have been looking for you too and we went to the information desk but we were unsuccessful,” she said, apologising profusely for making me go through so much stress.

Stress! Did I go through stress? Any form of stress I may have experienced instantaneously dissipated. Hmm! What a scare! As they say, all is well that ends well. I had waited for about two hours, just figuring out how to get to my hotel. I heaved a sigh of relief as I was led to a waiting cross-country vehicle belonging to the Nairobi Water Company.

After picking up another delegate, I was finally taken to my hotel.

1. Always carry some foreign money on you, preferably dollars, no matter where you are going.

2. When you get stranded look for the information desk around.

3. Make a move and take your own destiny into your own hands when all else fails, God will show up when you least expect him to.