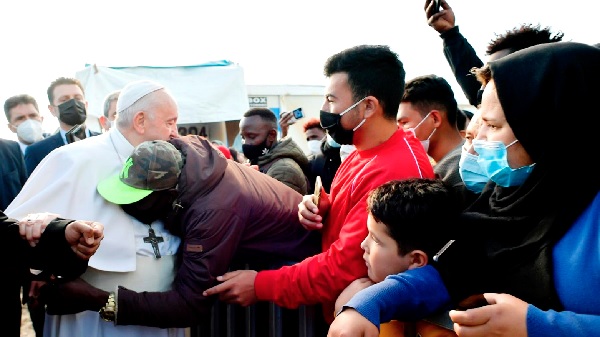 Visiting the Greek Island of Lesbos after his first visit in 2016, Pope Francis on Sunday, December 5, 2021 described European negative attitude to the migrants’ situation as a “shipwreck of civilisation” based on “narrow self-interest and nationalism!”

Speaking to the migrants, the Pope said they were being used for political propaganda, probably referring to the recent tussle between France and UK on migrant deaths in the English Channel.

The Pope urged focus by the Europeans or the developed world on the causes of migration such as the “forgotten wars” in Somalia, Ethiopia, Lebanon, South Sudan, Cameroon etc.

He also criticised the building of walls to keep migrants out, like Poland’s border with Belarus, the English-Channel between France and UK, and the US-Mexican border.

Again, he spoke about unrestricted flow of weapons into third-world countries creating insecurity as a factor contributing to people seeking better life elsewhere.

The Pope cited war, economic agreements “where people have to pay” in apparent reference to IMF conditionalities/World Bank loans which take over 70 per cent of African countries’ GDP in servicing debts.

Tanzania going to the IMF for a $1.3 trillion loan led to a rift between the President, and the Speaker who resigned on January 6, 2022.

Also in the first week of December, South-African President Ramaphosa was in Ghana. As part of his visit, he went to Juaben-Ashanti, where he participated in the 50th-anniversary celebration of Nana Otuo Serebour as Juabenhene.

Like Pope Francis who accused Europe of “narrow self-interest,” President Ramaphosa re-echoed accusations by the UN Secretary-General, Antonio Guterres, of the Europeans or the developed world practising “vaccine-apartheid” with the COVID-19 pandemic.

While many African countries have not vaccinated 10 per cent of the population because of the unavailability of vaccines, Europe has stockpiled vaccines.

Ramaphosa further described the west as hypocrites for pretending they did not know about Omicron when they had it in their countries, until South-Africa made the announcement of the discovery to the world, only to be ostracised!

He therefore asked Ghana and South-Africa to initiate the necessary protocols to enable them to produce vaccines to obviate the total reliance on others.

At the same time, UN Secretary-General Antonio Guterres condemned Europe and North-America following travel restrictions he calls “travel-apartheid” they imposed on South-Africa for announcing the discovery of Omicron!

The Secretary-General said South-Africa deserved commendation and not condemnation for telling the world what others knew, but kept to themselves.

It appears that following the failure of the prediction that COVID-19 would see African streets littered with dead bodies, Africa must be tagged with something negative no matter how far-fetched, hence the Omicron tag!

Both the Pope and President Ramaphosa spoke of the unfairness of the international political/economic system which is bereft of morality.

The sad fact is that, to the extent that the status quo benefits them, Europe or the developed world will not voluntarily cede the advantages.

Indeed, the slave trade and colonialism were all to advance their materialistic agenda. The greed and materialism have not stopped.

So, as proposed by Ramophosa, the 54 African countries must come together to produce a vaccine to stave off the dependency.

A question often asked is, how can we depend on people who predicted that African streets would be littered with dead bodies from COVID-19, to wish us well after their disappointment over the non-materialisation of their predictions?

Surprisingly, some African leaders continue to see Europe/the developed world as the solution to the problems they create in Africa.

It is a common saying in Ghana that we have very good doctors, but they don’t have the equipment to work with. Why can’t we use the money used sending big people out for medical treatment to equip our hospitals?

Perhaps Shakespeare’s “most-unkindest-cut-of-all” is when spokespersons or PROs attempt justifying such travels, and rub it in further, by making sense-of-entitlement claims, quoting previous beneficiaries.

If tiny Cuba, with all the international blockade against it, can manufacture its own COVID-19 vaccines, what are 54 African countries doing begging others?

A quote attributed to Chinua Achebe states that, “until the lions get their own historian, the tales of hunting will always favour the hunter.”

Until African leaders wake up, we shall continue to be “hewers of wood and drawers of water!”

Like Esau, for how long shall we sell our birthright for porridge?