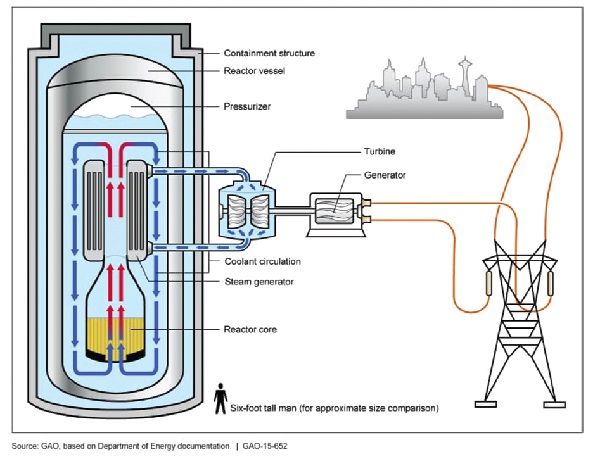 In comparison to existing reactors, proposed Small Modular Reactor(SMR) designs are generally simpler, and the safety concept for SMRs often relies more on passive systems and inherent safety characteristics of the reactor, such as low power and operating pressure.

This means that in critical cases, no human intervention or external power or force is required to shut down the reactor systems, because passive systems rely on natural circulation of the coolant water, convection, gravity and stable steam pressure.

These increased safety margins, in some cases, eliminate or significantly lower the potential for unsafe releases of radioactivity to the environment and the public in case of an accident.

There are many benefits of SMRs, which are linked to the nature of their design – being small (from 50 MW to 300MW or about one-third the size of a typical nuclear power plant) and modular, meaning new modules of the reactor can be built independently as modules in a larger complex, with increased power capacity added when required.

Given their smallness, SMRs can be sited on locations not suitable for larger nuclear power plants. Also, prefabricated units of SMRs can be manufactured and then shipped and installed on site, making them more affordable to build than large power reactors, which are often custom-designed for a particular location, sometimes leading to construction delays, and incurring huge cost overruns;for example,the only ongoing nuclear power plant being built in Europe, is located in the town of Olkiluoto, in Finland.

The project commenced in 2005, while I was a regular inspector to two other adjacent reactors; the new reactor, Olkiluoto-3 is a 1600MW reactor, which was expected to be completed in 2009, but is only now due to come on line in the middle of 2022, and has thus far cost over $ 11 billionUS. However, SMRs offer savings in cost and construction time, and can be deployed incrementally to match increasing energy demand.

SMRs are drawing the attention of policy makers across the U.S. and Europe because of their versatility; they can deliver a steady flow of energy both in the form of heat and electricity. Additionally, the power from SMRs can be used to balance intermittent supplies in locations that have wind and solar farms. Prime Minister Boris Johnson of the U.K. has set aside 500 million pounds for SMR design in a green economy programme, and President Joe Biden says that SMRs are one of the keys to long-term energy policy in the U.S.

The IAEA is coordinating the efforts of its Member States to develop SMRs of various types by taking a systematic approach to the identification and development of key technologies, with the goal to achieve competitiveness and reliable performance of such reactors. SMRs have reduced fuel requirements; power plants based on SMRs require less frequent refuelling – say, every three to seven years, instead of between one and two years for conventional nuclear plants (around 1000MW).

Some SMRs are even being designed to operate for up to 30 years without refuelling.

Some of the biggest investors are industrial companies, which are getting behind the SMR technology; SMR designs have emerged from Rolls-Royce Holdings, NuScale Power, Terrestrial Energy USA Inc. and TerraPower, which is being supported by an investment from Bill Gates.

In all, there are currently 67 unique SMR technologies in various stages of development worldwide, according to the IAEA.

SMR research and development in China is very active, with vigorous competition among companies, and this is encouraging innovation. The most advanced small modular reactor project is being built by Chinergy, a 210 MW HTR, which consists of twin 250 MW high-temperature gas-cooled reactors (HTRs); the technology is based on the experience of several innovative reactors in the 1960s to 1980s.

China is also developing small district heating reactors of 100 to 200 MW capacity. The heat market is very large in northern China, now almost exclusively served by coal, which causes serious pollution; other particulates of sulphur and nitrogen oxides are included in the pollution.

The SMR concept is the future of nuclear power plants.

The developers of SMRs are mostly at the design stage; currently, there are only 2 small units of SMRs in operation in the world - installed on a barge off the small town of Pevek in Russia’s Arctic coast (about 40MW each - the nuclear heating in Pevek, which was launched in November 2021, is part of Rosatom’s efforts to test a new model of residential heating for distant Russian settlements in Siberia).

It is becoming obvious that the superpowers have already lined up to gobble up the first productions of SMRs. Maybe that would be good for developing countries such as Ghana, as that would enable us to benefit from their operational experience before deciding on which installation would fulfil our energy needs – bearing in mind, the three classic requirements of safety – that the reactor would be operated without any hazards, security – that there would be adequate steps taken to prevent unauthorised intrusions, and safeguards – that all nuclear materials would be accounted for during scheduled inspections by the IAEA.

Besides, after Chernobyl and Fukushima, nuclear power has become very unpopular; as a nuclear inspector, I admired Japanese technology tremendously, and I even inspected Fukushima during my safeguards missions to Japan.

Japan could not handle an accident, which they had prior preparations for (they had even erected a 10-meter sea defence wall for protection of the Fukushima reactor, prior to the catastrophe, but the Tsunami from the earthquake of March 10, 2011 generated a 15-meter wave which defeated their defence wall, and flooded secondary cooling generators, thus causing the overheating of the fuel assemblies and explosion from hydrogen gas which was generated by the superheated steam).

It is therefore a lesson for us developing countries to take floods and earthquakes into serious consideration in any future nuclear power planning programmes.

Japan is quite unlucky to be located in the region, dubbed, ‘ the ring of fire’, where earthquakes are rampant; prior to Fukushima, I verified the strong effect of a powerful earthquake at another Japanese reactor at Kashiwazaki, in July 2007, when I was sent from Vienna to go and service IAEA surveillance systems at the reactor hall.

My admiration of Japanese technology was heightened, as I noticed how the roads around the reactor were all cracked, but the reactor building was intact, except for the strong splash of water which occurred in the hall, as the earthquake shook the reactor; Kashiwazaki never got restarted before 2011, when the Fukushima accident occurred, and has remained shut down (only 9 out of 42 operable reactors have been restarted after the accident, even as Japan was relying heavily on nuclear power for its energy needs).

Possible uses of SMRs in Ghana

As earlier alluded to in this write-up, SMRs are being designed to deliver power of about 100MW; due to their smallness and modular installation, existing independent power producers can negotiate with SMR developers to incorporate the technology in their power production. Indeed, in the video from Copenhagen Atomics, they are offering to go into Build-Operate-Transfer partnership with local power producers; except that they would offer only the reactor part with fuel supplies at the primary side of the reactor.

Secondary facilities, such as steam generators – to be used from the heat of the reactor for electricity generation should already be in place, or the installation must be borne by the local partners. That means that instead of continuing to use oil, coal, or gas, the fuel would be replaced with the reactor; in the case of Copenhagen Atomics, the technology they are developing is based on the molten salt fuel/coolant concept (molten-salt reactors are considered to be relatively safe because the fuel is already dissolved in liquid and they operate at lower pressures than conventional nuclear reactors).

Also, for instance, if the Asogli power plant at Tema is rated at 600MW capacity, then about 6 modules of SMRs would be required. Similarly, if Valco is operating 5 potlines, with each requiring about 100MW of energy, then five SMRs could be designed to provide the heat energy for the Valco aluminium smelter plant – to replace the power supply from ECG. Other enterprises that could be served by SMRs include the mining industry, desalination of water for communities and the steel manufacturing industry.

So, without the expectation of any major accident, the SMR concept is the future that would rekindle interest in nuclear power the world over, including Ghana.

This is the concluding part of the article we published on Thursday January 6,2022.

The Writer is a retired Engineer,International Atomic Energy Agency and Consultant KERSL Automation, Spintex Road, Accra.
E-mail: This email address is being protected from spambots. You need JavaScript enabled to view it.
Contact: 0249853691