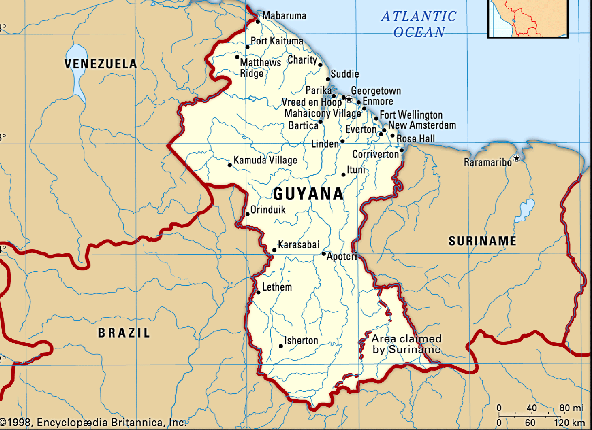 Most Ghanaians are not much familiar with the country called Guyana.

Interestingly, many people in other countries who are not familiar with Ghana also mistake Ghana for Guyana because the names sound almost the same.

With the recent diplomatic moves between the two countries culminating in signing of bilateral agreements across several sectors of their respective economies, the two countries seem to indicate that apart from being semantically similar in names, there are other similarities for bilateral cooperation.

Guyana is a relatively small country with 780,000 inhabitants. Like Ghana, Guyana is well noted for its problems than its successes. Maternal mortality, suicide and brain drain are at their highest in Guyana.

At least, four-fifths of its university graduates leave the country in search of greener pastures. It is not surprising that its diaspora is nearly as large as its population.

Children spend 12 years on average in schools, but education is so poor that they learn less than seven years’ worth of materials.

Most of the population, including those in the capital Georgia are on the low-lying coast, vulnerable to flooding. Guyana stands today as the third poorest country in South America.

Fortunately, the discovery of oil in recent times is changing the narrative. Like Ghana, Guyana politics is highly polarised, but the racial and ethnic elements in their politics is at its extreme.

Contract agreement with oil companies after discovery was made in 2016 by the administration of the Alliance for Change (AFC), a party dominated by Afro-Guyanese that lost power to the current administration in the March 2020 elections.

The current administration, the People Progressive Party (PPP) led by Irfaan Ali, a party dominated by Indo-Guyanese, had been in charge of affairs for 23 years, until 2015, when they lost power to the AFC.

Afro-Guyanese remember the 23 year rule of the PPP as a time of corruption and Indo-Guyanese triumphalism. Those of India origin also hurl similar accusations at AFC, when they were in power.

Oil wealth could make life much better, but most Guyanese have their own doubts. The campaigns leading to the 2020 election was inflamed by allegations of shady deals by government officials in the award of oil contracts.

A February 2020 report by Global Witness, a pressure group, claiming contracts signed by government officials favoured the Multinational Oil Company, and that the agreement made Guyanese poorer, fuelled such allegations more. Rystad, a consultancy firm, disputes Global witness’s estimate of government‘s share of the oil.

That is the level of mutual mistrust and suspicions that exist between the two major political parties in Guyana organised mainly along ethnic and racial lines.

Guyana’s main defence against petroleum peril is its sovereign-wealth fund called the Natural Resource Fund (NRF). All the money from oil, and perhaps from mines and forests is put into an account at the New York Federal Reserve.

To prevent inflation, Dutch disease and preserve money’s value for future Guyanese, the government has restrictions on drawing on it.

When it comes to oil, we have been in the business for more than a decade now and we could be of an immense help to Guyana.

Their PPP/AFC duopoly that is ethnically and racially charged is a major challenge they keep grappling with.

The main hope for ending the stand-off rests with mixed race and indigenous Guyanese whose weight in the population is increasing. An array of third party is trying to break the duopoly.

The Liberty and Justice Party, which represents mainly indigenous people, hope to add to that effort.

With the New Patriotic Party (NPP)/National Democratic Congress (NDC) dominating politics in Ghana, we are just in the same soup as Guyana with parties such as PPP (not the Guyana’s ruling party), making every effort to break political duopoly in Ghana.

The writer is with the Institute of Current Affairs and Diplomacy (ICAD),
E-mail: This email address is being protected from spambots. You need JavaScript enabled to view it.