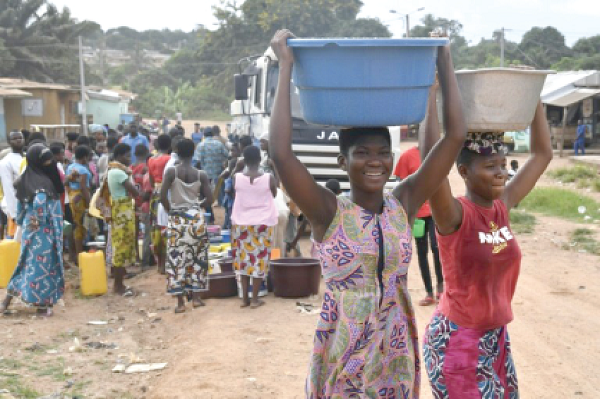 A tanker service delivering water. Water supply shortages compel nurses to cross the border to Burkina Faso in search of it. Follow @Graphicgh

An Upper West Region radio correspondent has a peculiar and humorous way of signing off his reports! He states: “Reporting for Joy Neews (News), Rafiq Salam! Waaaaaaa (Wa)!

On February 23, 2022, he reported about Ghanaian nurses walking across the border to Burkina Faso to fetch water for themselves and the health facilities they work at, in the Wa-West District!

In Geography and History lessons in primary school in the 1960s, we were taught about Ghana’s neighbours.

To the north was Upper Volta. To the east was Togo, and to the west was Ivory Coast. South was or is the Atlantic Ocean!

All three neighbours were or are Francophone, with Ghana an Anglophone island.

Additionally, we were taught that, unlike Ghana, Togo and Ivory-Coast, Upper Volta was a desert country. Indeed, they imported food from Ghana!

So, how come in 2022, Ghanaian nurses have to cross over to nearby villages in Burkina Faso, a desert country, to fetch water for their health facilities?

Sadly, in 1987 he was murdered in a coup d’etat, allegedly by his second-in-command and childhood friend Captain Blaise Campaore, who then installed himself as president.

February 24, 2022 was the 56th anniversary of the overthrow of Ghana’s first Republican government of Osagyefo Dr Kwame Nkrumah!

With Ghana only nine years old in 1966, majority of Ghanaians today were not born at the time of the coup.

Interestingly, the percentage of Ghanaians born at or before independence (65 years and above) is only 4.2 per cent of Ghana’s current estimated population of 31.5 million.

For us in secondary school at the time, it is sad that in 2022, Ghanaian nurses should “cross over” to Burkina Faso for water.

Indeed, discussing this with a colleague, he asked:

“Dan, where do we get our tomatoes from? Don’t our tomatoes or onions come from Burkina? When truck drivers plying Ghana-Burkina went on strike, didn’t tomato price shoot up because of shortages?

Why should we be dependent on our desert neighbour for tomatoes? Should we be surprised we are now looking for water from Burkina?”

That brought in the question or discussion, what happened to the Pwalugu Tomato Factory, the Wenchi Tomato Factory, Nsawam Canneries and the many factories Osagyefo established before his overthrow in 1966?

For those born after Osagyefo’s overthrow, some of the import-substituting factories or industries at the time of the February 24, 1966 coup d’etat are as follows:

Sadly, virtually none of these factories exists today!

In 2006, I was part of an Armed Forces delegation which visited Ghana’s Helicopter Squadron based in Bouake, Ivory Coast, on UN Peacekeeping duties.

At dinner on our first night, when a jumbo-sized tilapia was put on the high-table, like my senior colleague from Accra, I assumed it was for us the three Generals.

With a mocking smile, our host the third General, the Defence Attaché in Ivory Coast, told us that was for me. Almost immediately, two more giant tilapias arrived.

To our surprise, everyone at dinner was served a huge tilapia, with kenkey and fresh-pepper accompaniment.

Our host then educated us that, Cote d’Ivoire uses its water bodies to grow tilapia locally for consumption. So, tilapia did not move from one part of the country to the other!

Every district grew its own tilapia to self-sufficiency! Importation of tilapia was unheard of in Cote d’Ivoire.

My senior colleague asked me sadly: “Dan, what is wrong with us? Our neighbours grow their tilapia, and we import not only tilapia but tomatoes, onions etc to make fresh pepper?”

In the 1970s under “Operation Feed-Yourself,” Ghana was an exporter of food including rice!

Today, while TV shows tons of locally produced rice piled up in the north, millions of dollars are used to import rice!

Leadership solves problems such as producing our own food to ensure food security, and providing safe drinking water, and not explain why problems are not solved.

Research by the NGO, Longevity Project Group for 2021, revealed that Ghana has an “incredible low life-expectancy” of 64, compared to Kenya’s 67 and Senegal’s 69.

Officialdom’s cynicism, fault-finding or blame-game, negativity and greed must give way to a positive legacy of problem-solving thinking. National self-denigration will take us nowhere.

Ghanaian nurses must have water in Ghana (as in UN Sustainable Development Goal 6 on “Clean Water and Sanitation,”) and not cross over to Burkina Faso for water, 65 years after independence!