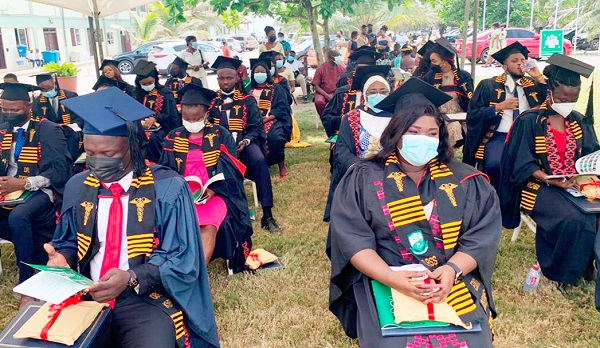 Christmas is a period for giving and sharing. In Ghana, no matter how poor we may be, we still share our widow’s mite at Christmas.

This is the second batch of doctors the school has produced. In December 2020, the first batch of 30 doctors graduated and was inducted into the Medical and Dental Council.

So, what is Family Health University College?

It started in 1997 as a Diagnostic Centre in a garage at 51 Guggisberg Street, Korle Bu, Korle Gonno, Mamprobi. From its humble beginnings as a “backyard clinic,” FHUC in 2016 was given a University status, and formally became known as the Family Health University College.

In his address, the President of FHUC, Prof. Kwawukume said work was in progress to get a Charter for FHUC as a fully-fledged university soon.

He added that a unique feature of the Family Health University Medical School is the introduction of Leadership Training in the curriculum of the students. The aim is to ab initio prepare the new doctors for the real world to take up leadership challenges as soon as they graduate.

This comes from the realisation that while it is often assumed that graduating with medical, engineering, law or other degrees automatically guarantees leadership; the reality is that this assumption is incorrect. It is this anomaly that Family Health University Medical School seeks to correct by introducing leadership training.

The Special Guest of Honour at the 2021 graduation was recently retired Managing Director of Stanbic Bank, Ghana, Naa Dr Alhassan Andani,. He is also the Chairman of Board of Trustees for the Endowment Fund for the Family Health University Medical School.

In his address, Dr Andani commended Prof. Enyonam and Dr Mrs Susu Kwawukume for their vision in conceiving and hatching the laudable idea of training doctors in support of government efforts for Ghana. He added that for the bold initiative taken by the FHUC in improving the unsatisfactory doctor-patient ratio, the Medical School deserves a government subvention of at least 30 per cent.

In this regard, he commended FHUC for the initiative of an Endowment Fund which would be launched formally in early 2022.

He further noted that knowing how expensive the training of doctors was everywhere, he deemed the launching of the Endowment Fund a very worthy cause, as it would support brilliant, poor students who could not afford the cost of doctor training.

He bemoaned the fact that over 80 per cent of doctors in Ghana were concentrated in Accra, Kumasi and Sekondi –Takoradi, and the regional capitals, with virtually no doctors in the rural areas.

Coming from a rural area himself, Dr Andani mooted the idea of communities sponsoring brilliant students to FHUC after which they would return to serve in their communities.

He said starting from the 2021/2022 Academic year; he was going to sponsor two students annually from his community.

He advised other rural communities to do likewise.

Representing the Vice Chancellor of the University of Ghana at the graduation was the Provost of Health Sciences, Prof. Julius Fobil, who presented certificates to the students.

Prizes were awarded to outstanding students with Dr Simon Sackitey emerging the Honour Graduate. Dr Sackitey, who was also the valedictorian, paid tribute in his Valedictory Speech, to the faculty and support staff of FHUC, for their love over the six years that they spent in training.

He also thanked their parents and guardians who had made tremendous sacrifices to see them through. He pledged that he and his colleagues would work hard to justify the investment made in them.

Finally, it is hoped that the appeal to the government by Dr Andani particularly in terms of subvention for FHUC will be met favourably. It is also hoped that when the Endowment Fund is launched in early 2022, the private sector/individuals will donate generously. The idea of communities sponsoring students to FHUC, even if it is only one student per year, is laudable.