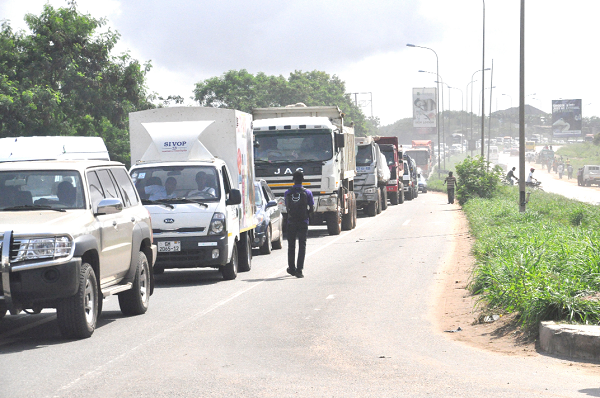 I am not a globetrotter but for the opportunities I have had to travel outside the country and from what I have read, I can confidently say without any fear of contradiction that nowhere in the world do motorists spend hours in traffic because of the collection or the payment of road tolls.

Again, I have never seen anywhere in the world where vehicles on dual carriageway, driving in the opposite direction  faced oncoming vehicles just to pay road tolls; at least not in this 21st Century.

Over the years, many, including myself have written about the irrelevance of the tollbooth at Tuba Junction, along the Accra- Kasoa road, otherwise known as the Kasoa tollbooth.

One normal Friday evening, (January 15, 2021), I had to travel to Cape Coast to spend the weekend with my family.

I set off from the office at the Graphic Road at about 6 p.m. and within 40 minutes; I was at the junction of the former transmission station of the Ghana Broadcasting Corporation (GBC), which overlooks the Densu River on the left, towards Kasoa.

I noticed from a distance what seemed to be a problem ahead.

Thinking it could be a break-down vehicle, which had led to a snake-like queue of vehicles, compelling them to move at a snail’s pace, I moved ahead just to satisfy my curiosity but it turned out to be a heavy vehicular traffic jam.  After a gruelling 45 minutes of the burning of fossil fuel; enduring heat from the engines of other vehicles and the stressfulness of the half a kilometre journey, I finally paid my toll of 50 pesewas and continued the journey.

Getting to the Gomoa Buduburam junction, which many now refer to as Liberia Camp, there was another traffic jam, but not as chaotic as the human-induced traffic at the toll collection point and so I spent about 15 minutes. Thank God, I finally arrived in Cape Coast at about 10 p.m.

The road was so clear and so I made it to Kasoa close to two and a half hours. I never imagined there would be a gridlock as at 5:20 a.m. at the Galilea Market at Ngleshi Amanfro.

My mood suddenly changed and I became furious and angry at whoever sited the Kasoa tollbooth on that road, vowing never to forgive that fellow for the discomfort and stress of travellers on the stretch.

It is significant to note that from 5:20 a.m. when I joined the trail of vehicles, I burnt my fuel, suffered all that discomfort and stressful drive just to pay 50 pesewas and as at the time I paid the toll and crossed, it was 6:48 a.m.

I thought that what I had gone through on Friday evening was the worst form of the much talked about Kasoa tollbooth traffic, but the Monday morning one meant that the Friday experience though unpalatable, was just a tip of the iceberg.

Like many road users, I kept asking myself why the authorities keep punishing road users on the Kasoa end of the Cape Coast-Accra road and Accra-Cape Coast road with that tollbooth.

From what I endured, I see the collection of the toll as extortion, especially when after years of payment, there has been no improvement on the condition of the road nor street lights, the median overgrown with weeds, the nuisance caused by hawkers, some whom are encroaching upon the shoulders of the road with containers, and above all the poor state of a section, few metres after the tollbooth on the Cape Coast-Accra stretch which floods with mud that covers the street whenever it rains

It is obvious that the Ministry of Roads and Highways, which is in charge of the tollbooth, only cares about the money that accrues from the collection but not the health, safety, comfort and supreme interest of the citizens.

I am of the view that after all these years of silence, the time has come for the people, especially those who use that road often, to unite and drum home the message to get rid of the tollbooth at its present location for the free-flow of traffic.

The people of Central and Western regions and residents of Kasoa have suffered enough from this tollbooth, which clearly has outlived its usefulness. The time to relocate it at a suitable place is now. Enough is enough!