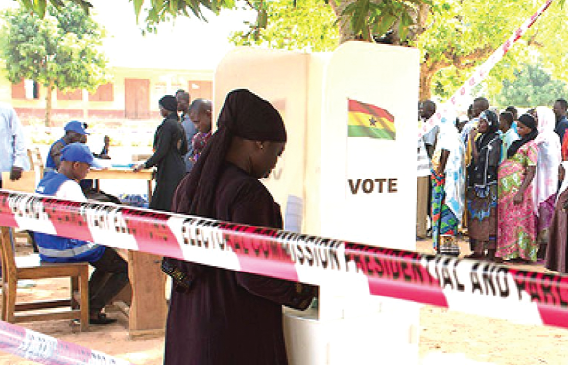 It had been a long and hard campaign. Both sides of the political divide had a point to prove and desperately so.

The incumbent NPP was not prepared to go down the ‘one-term’ president route, a precedent created in 2016, whilst the NDC was determined to stage a come-back and somewhat dilute their presidential candidate’s unhappy record as the first sitting president to lose power to an opposition candidate.

The campaign rose to a fever pitch as the parties crisscrossed the country mopping up support as 7th December beckoned, even with covid-19 hanging in the air, almost like the Sword of Damocles, as our doomsday ‘experts’ evoked spectacles of an Armaggedon of a pandemic up and down the land.

A week ago today, people could not help but share on social media platforms their memories of Election Day 2020 and all that it entailed.

From initial contradictory claims by both sides of a win to the confident, famous ‘DJ, give us music’ request by the NDC’s Peter Otukonor all the way to scenes of both parties’ collation centres and the EC’s confusing declarations, Election 2020 threw up its own little idiosyncrasies in its wake that at the same time made the blood boil and kept us amused only in the way that a Ghanaian election could.

When the dust had settled, President Akufo-Addo had won the presidential election by a very comfortable margin.

But Parliament was split right in the middle, with the Fomena MP, technically an independent, appearing to be the kingmaker.

Then on 6th January 2021, amid high drama, raucuous scenes, a bout of ballot box-snatching and a sprint race in the parliamentary chamber, Mr. Alban Bagbin defeated Prof. Ocquaye for the post of Speaker, sending the NDC caucus into spasms of excitement.

Dissatisfied by the declaration by the Electoral Commission of President Akufo-Addo as the victor in the presidential election, the NDC took us all down the path the NPP had taken us eight years earlier, in 2012.

They filed an election petition in the Supreme Court. The nation was set for another bout of ‘Atuguba, Akoto Bamfo, Owusu dissenting…’ and we propped ourselves before our television sets. Chief Justice Anin-Yeboah was in charge of the tight leash.

Whilst the 2012 petition threw up its moments of ‘amicus curiae’, Dr. Bawumia’s famous pink sheets and his often testy spats with Mr. Tsatsu Tsikata as well as a very public drubbing of Sir John of blessed memory, Stephen Atubiga and Ken Kuranchie for ‘verbal diarrhoea’, the rather short 2020 petition case had its own unique moments.

The sight of the famous General Mosquito sitting in the witness box and punching audibly at his calculator sent many wry smiles across the land, whilst it was Rojo Mettle-Nunoo’s famous ‘tea without biscuits’ outburst that had many rolling on the floor in guffaws.

Then there was the famous, long-suffering, aged legal wig of the NPP’s lawyer, Mr. Akoto Ampaw, the withering, wide-eyed cross-examination by the EC’s lawyer, Justin Amenuvor, Mr. Tsikata’s many applications before the court and his long arguments with the bench, and finally the vexed issue of whether or not the EC Chair should mount the witness box.

When the Supreme Court’s air conditioning stopped humming, the President remained firmly in office. The 2012 verdict had repeated itself. The drama was over.

Twelve months down the line after the election and all it entailed up until the swearing-in of President Akufo-Addo, it appears both sides of the political divide are already gearing up for Election 2024, for ours is a system that is in perpetual election mode. The sabre-rattling has begun.

On the NPP side, the conversation has already started over who is to lead the party into the next election.

Names have been bandied about, primarily those of the Vice President and the Trade and Industry Minister. Caustic arguments have started and posters are flying around.

On the NDC side, it seems almost a given that ex-President Mahama will lead the party into the election, even though Dr Kwabena Duffuor’s name has popped up.

Already, the former President has gone on a ‘thank you’ tour of the nation and spoken very publicly on a number of national issues, which are good indicators of his interest in the ultimate prize. Like Presidents Mills and Akufo-Addo, he is probably banking on third time lucky.

The race is on, as is the unending argument between the two parties on the economy, on the health sector, on roads, on education and so many others.

Of course the opposition is buoyed by the fact of its parliamentary numbers and confident of its ability to give government a bloody nose.

The ‘beauty’ of opposition is its luxury of throwing blows and heaping coals on the head of government.

No political party has had more than two consecutive terms in office since the beginning of the fourth republic, and that must give the NDC some comfort and adrenaline.

Government, on the other hand, is busy projecting its best foot forward as it tries to ward off blows from the opposition and the public and trumpet its achievements.

The NPP seems bent on ‘breaking the 8’, as it puts its dogged determination to go beyond the normal two-term menu this country’s electorate has always delivered to each of the two main strands of its political class.

Perhaps the party believes that if it can buck the trend and create a one-term president, it can equally ‘break the 8’. In politics, there are really no sacred cows.

A number of friends from both NDC and NPP have made various projections to me about Election 2024.

I always ask them to relax, get a cold beer and listen to some reggae music, because as the late British Prime Minister Harold Wilson once said, ‘a week is a long time in politics’.

I find it difficult to make any serious, credible projections either way three long years away from the next election.

There are simply so many political variables that can turn an election either way.