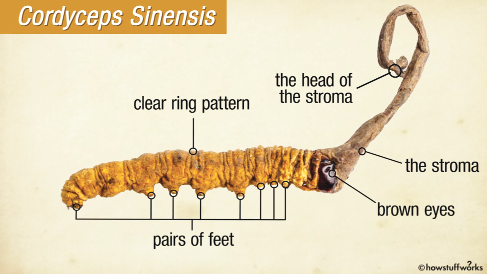 Cordyceps fungus is sometimes called the caterpillar fungus in the high mountain regions of China. Most cordyceps supplements are made in a lab.

The first people to discover the many benefits of cordyceps initially observed animals eating the wild fungus and growing strong.

Farmers and herders began to use the fungus in powder form to make tonics and teas.

Of the more than 400 species of Cordyceps discovered, two have become the focus of health research: Cordyceps sinensis and Cordyceps militaris.

Lue et al.,(2008) also argues that taking cordyceps may be especially helpful in the treatment of inflammatory-related conditions, such as Crohn’s disease, arthritis, leaky gut and asthma.

One animal study conducted by Cai et al.,(2009) published in the journal Phytotherapy Research demonstrated that eating cordyceps extract increased the activity of antioxidants such as superoxide dismutase and glutathione peroxidase in the blood.

Apart from that, it also helped boost brain power and enhanced sexual function in aging rats.

Another animal study by Zhou et al.,(2015) in China found that administering cordyceps extract to fruit flies significantly extended their lifespan by blocking oxidative stress to the cells, confirming their potent anti-aging properties.

A 2010 study by Chen et al demonstrated that supplementation with Cs-4 (Cordyceps sinensis) improved exercise performance and contributed to overall markers of wellness in older adults.

One animal study by Liu et al.(2014) found a strong link between cordyceps and cardio support. The study demonstrated that Cordyceps could help protect the heart against damage and lower cholesterol levels to prevent coronary heart disease.

The study concluded that cordyceps extract helped reduce damage to the heart and liver in rats with kidney disease.

Several promising in vitro studies have found that cordyceps could possess powerful anti-cancer properties and might help block the growth and spread of several different types of cancer(Levy, 2018).

In vitro studies show that cordyceps extract may be effective at reducing the growth of liver, lung and colorectal cancer cells (2015).

An earlier study by Liu et al(2008) argues that, the anti-cancer effects of cordyceps go beyond stopping cancer growth.

A similar study also by Liu et al.,(2009) cements that these medicinal mushrooms could reduce the risk of side effects caused by cancer treatment, including leukopenia, a condition sometimes caused by chemotherapy or radiation that results in a decrease in the amount of white blood cells in the body and a higher risk of infection and illness.

A recent study by Ashraf et al.(2020) examined the diverse therapeutic effects of these medicinal mushrooms.

The study demonstrated that cordyceps could act as nutraceuticals that could support mental health by both fighting environmental stress and oxidative stress in the body.

Hu et al.,(2013) study examined the effects of cordycepin, which are naturally found in cordyceps, to see if it would help increase natural sleep in rats. The study found that cordycepin increased nonrapid eye movement sleep in rats.

The authors note, “… this experiment can provide basic evidence that cordycepin may be helpful for sleep-disturbed subjects”.

Studies in humans have used 1,000–3,000 milligrams per day, which doesn’t seem to be associated with any common side effects.

Cordyceps are generally safe for most people, but there are some potential cordyceps side effects and interactions to be aware of, especially if you have any underlying health conditions or are taking certain medications(Link, 2021).

The writer is President, Nyarkotey College of Holistic Medicine/law student