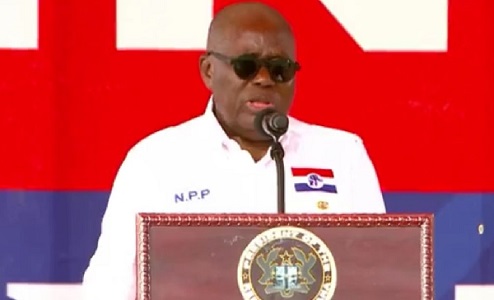 Eight is a complex number in shape. It is well rounded at both ends, and on both sides. Breaking the figure eight, for me, is a difficult endeavour.

I believe it cannot be broken unless it is destroyed, then it is no longer the figure eight.

At best it becomes two separate circles, or even two zeros! But Breaking the eight is the mantra of one of the main political parties in Ghana. It is its rallying campaign mantra for Election 2024.

By Breaking the eight, the New Patriotic Party (NPP) believes it is going to end the cycle or pattern of Ghanaians voting out political parties after they have served for two, four-year tenures, that is, eight years.

Consistently, great Ghanaians, who are long-suffering but intolerant of politicians and their parties who take them for granted, boot them out after eight years, when they least expect it.

Believing in their self-worth and achievements, the politicians and parties virtually shove themselves and what they believe they have achieved in the faces of Ghanaians.

They fail to realise that no KVIP inaugurated by them is conjured from heaven “freely” for the people!

They forget that it is the collection of taxes, tolls and levies that enables them to even have the clout to negotiate for more resources from donors, which also positions them above all others to inaugurate toilets!

Breaking the Eight came up after the 2020 elections and the NPP’s victory, lending credence to what some experts term, the “perpetual electioneering cycle of our politics”; thus, no sooner had the party won the election, than the campaign propaganda of the 2024 elections began, four clear years away.

So when does the party in power find time to really concentrate on governing?

Now, the NPP wants to attempt this feat, and break the jinx!

I am not a political pundit, and often my ire is eked particularly when politicians are at their preposterous best in their sayings or actions. That is when I pay attention to them, and I write.

Breaking the Eight featured prominently at the just ended Delegates Conference of the NPP over the weekend. For most, the goal was to elect executive to lead the party to Break the eight.

But I am wondering, how politicians, particularly, those in the governing party, still want to govern when they have admitted a bad economy and have gone to the IMF for a bailout?

Also, why are politicians in opposition, particularly in the National Democratic Congress (NDC) clamouring to lead a broke country?

Are politicians seeing what the generality are not seeing?

I wish the NPP well in their endeavours to Break the eight, which could be a herculean task, because Ghanaians and their sympathisers have lost faith in their governance (Afrobarometer Round 9).

Corruption and the scandals (including the alleged partitioning off of some state lands “forever” to beneficiaries by public officials; and the sore management of the economy resulting in the return to the IMF and the difficult economic times are all signs of the enormity of the challenge in Breaking the eight.

Already, most citizens are tired of the twin excuses of COVID-19 and the Russian/Ukraine war by the government and its assigns to justify difficulties, which are at the heels of the banking sector clean-up, costing us about GH¢23 billion and leaving us with no thriving indigenous banks.

Recently, an economist said on a local FM station that it was not the difficulties that defined the economic situation, as each country had different dynamics, but it was the type of leadership navigating people through the difficulties.

That leadership has not really been shown.