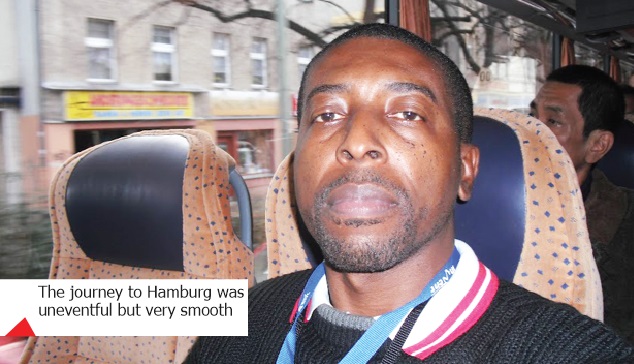 In the last edition I recounted how I struggled through a movie after lectures at the German film theatre and the headache I experienced just trying to get some few items for family and friends at the mall, in view of my scanty purse. The story continues.

In fact, at certain places I had to go round several times before I could finally settle on some stuff I thought were good bargains – Oh small buying I want buy too so so wahala and so so headache, all because of money hmm!

And I actually got back to my apartment with a nagging headache – and why wouldn’t I? To my utter surprise the clock on my table read just after 6p.m. when I entered my room, which put the time I spent at the shopping mall at approximately six hours – unbelievable!

Yes, it was incredible how long I spent at the mall, but that is what happened. On the other hand, if I had wads of Euros in my wallet (as if I even carried one) I could just have bought the choicest things I had seen which I liked, just at a go – one touch!

Drained and tired, I had returned from my ... was it big or small shopping (you be the judge), but without the spree. Hey, but I was satisfied – it was not all gloom. I said to myself “I can now go back home with my chest out as befits a been to.

There was actually no time to savour the satisfaction I felt, for just the next day, which happened to be my second Sunday in the German capital of Berlin, we were due to leave very early – 8:30a.m. (7:30a.m. in Ghana) to Hamburg, a German habour city. No mercy for the cripple; you can say. Hamburg, here we come!

We left the apartment for Hamburg at approximately 9a.m. the next day, after picking up a lecturer and a seminar assistant, in a very big tourist bus.

The journey to Hamburg was uneventful but very smooth and took a little over three hours. Although we had been scheduled to make a stop on our way to see a wind farm, that did not happen, but we instead made a brief stop at a rest stop.

We, however, saw lots of wind farms along the way, which spoke volumes about the seriousness Germany attaches to renewable energy. Dotted along the road were the unmistakable red and white wind mills that were being turned occasionally by the wind.

Also, as was to be expected, we travelled on a first-class road from Berlin right to Hamburg and never at any point experienced vehicular traffic.

What’s more, although the seminar assistants expressed worry as to whether we could arrive in Hamburg in good time, the driver drove at a regular speed within the speed limit for the entire journey.

Back then, in Germany, renewables provided 6.7 per cent of primary energy and 14.2 per cent of electricity consumed. Since the potential of hydropower had largely been exploited, wind energy offered the greatest opportunities for expansion.

Technological development in this field was highly advanced, and there was solid experience from using the technology.

Wind turbines use the wind’s kinetic energy, which is created through differences in atmospheric pressure near the earth’s surface. In Germany wind turbines are exclusively used for the production of electricity, which is fed into the grid.

The share of wind power in electricity generation was projected to increase to 25 per cent by 2025, based on the electricity consumption then. It is believed this step alone would reduce Germany’s carbon dioxide emissions by 20 per cent, which is impressive proof of the importance of wind energy for climate protection.

Available records say a total of 833 new wind turbines with a capacity of 1,667 MW were installed in 2007. These turbines provided 39.5 billion kWh in 2007, which corresponded to a share of about 6.4 per cent in gross electricity consumption. In 2009 the total installed capacity of wind power was 22,247 Megawatts.