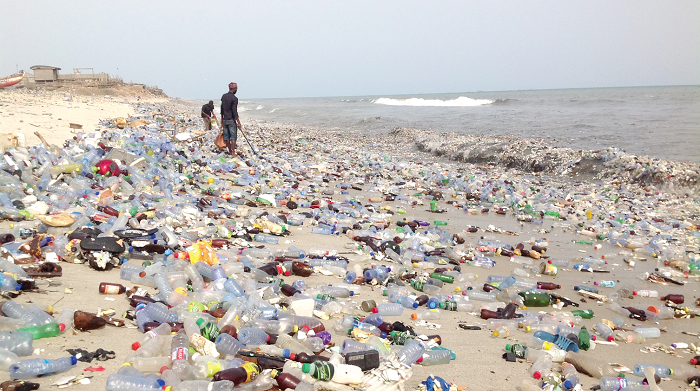 The rate at which huge piles of plastic are washed into the sea and onto the beaches in Accra is alarming, even to the surprise of fishermen in the capital.

Today, fishermen in three fishing communities in Accra - La, James Town and Korle Gonno - are catching plastic debris from the Atlantic ocean on a daily basis as plastics often find their way into the ocean and onto the beaches from storm drains that serve as pathways.

Worriedly, many of these densely clogged drains allow plastics to flow directly into the sea, which pushes back some of the plastics onto the beaches in Accra, a city that generates waste in excess of 3,500 metric tonnes daily, 350 metric tonnes of which is plastic, according to the Ministry of Sanitation and Water Resources.

I came face-to-face with this reality when I visited the beaches at La, James Town and Korle Gonno in March, April and May 2018 to observe plastic debris washed up on the beaches after separate downpours, and what I saw was quite appalling.

There was a deluge of plastics floating on the sea, with the tide constantly depositing a chunk of the trash onto the beaches that today look almost like small landfill sites where plastics have been accumulating exponentially.

I spotted fishermen drawing their fishing nets, known locally in Ga as ‘Tsaani’, from the ocean, often bringing to the shore nets full of garbage, most of it plastics, ranging from water and alcoholic beverage bottles, grocery bags, disposable cups, takeaway containers, sacks, torn clothes and shoes.

The frustration on the faces of the fisherfolk reflected their worry over how plastic had become ubiquitous in the sea and on the beaches.

“We are today catching all these plastics from the sea because of the large amount of plastics entering the sea from choked drains all over Accra, and this problem is threatening our livelihood,” the Lead frail-looking Fisherman, Nii Kpakpoe, lamented.

The experience of fishermen at the Labadi Beach is no different from that of their counterparts at Korle Gonno and James Town where the fishermen are being bogged down with the catch of plastics from the sea.

“When you go to sea as a fisherman, you are to bring back fish and not plastic. However, today fishermen often pull their Tsaani from the sea full of plastics and this beats our imagination,” the Chief Fisherman of James Town, Nii Kai Okaishie III, recounted.

Sadly, as the rains continually clear plastics from drains such as the one at the La T-junction right across the La Royal Palm Beach Hotel, the Odaw and the Osu Christiansborg Castle directly into the lagoons and the sea, the plastics accumulate few days after downpours.

“Today, plastic waste is a big problem that is not only contributing to fishermen catching plastics from the sea, but is also making the beach dirty and killing its tourism potential,” the Operations Manager of the Labadi Beach, Mr Joseph Annan Charway, said.

Similar concerns were shared by the General Manager of the Labadi Beach Hotel, Mr Michael W. Rathgeb, who said, "Our biggest problem as a hotel is the filth on the beach and the negative comment international travellers put on Trip Advisor, which cast a bad image on the minds of other international business travellers.”

When I visited the La Dade Kotopon Municipal Assembly to seek answers to what the local assembly was doing to address the challenge, it emerged that the assembly itself had been overwhelmed with the plastic challenge.

“As a local authority, we have engaged waste management firms to clear up garbage from storm drains, but the poor attitude of the people towards the environment is causing the problem to get out of hand,” the La Dade Kotopon Municipal Environmental Officer, Mr Busby Asiedu, lamented.

Sadly, the rate at which plastics in Accra find their way into the ocean appears to be fulfilling the news report that the ocean will contain more plastic than fish by 2050 unless the world takes a radical action to stop rubbish from getting into the sea.

According to the World Economic Forum, at least eight million tonnes of plastic end up in the ocean, lakes and rivers every year - the equivalent of a rubbish truck of waste every minute, indicating that by 2030, plastic is expected to be leaking into the ocean at a rate of two trucks per minute and by 2050, that could hit four trucks per minute.

While the government, on May 24, 2018 released GH¢200 million to the Ministry of Sanitation and Water Resources to help address effectively the sanitation problems in the country and to fulfil its vision of making Accra the cleanest city in Accra, the general attitude of Ghanaians towards their environment could be a major stumbling block to making  the vision a reality.

This is because we live in a filthy capital where both big and small shopping outlets, hotels, pubs, restaurants, food vendors and market women easily hand out single-use plastics from straws, food containers, cutlery and plastic bags, all of which degrade into microparticles capable of entering the food chain and posing serious health risks to the four million inhabitants of Accra.

To beat plastic pollution and curb the number of plastic that leak into the ocean, lakes and lagoon, it is time the government and local authorities placed litter bins at vantage points in the city and created an environment that inspires people to appreciate the economic value of plastic in order to segregate their waste and stop the reckless littering.

Given the poor urban waste management and recycling processes in Accra, it is already clear the need for measures to ban the use of single-use plastic products and encourage hotels, shopping centres, food vendors to adopt the use of alternative eco-friendly materials such as paper bags.