The words gone out of fashion 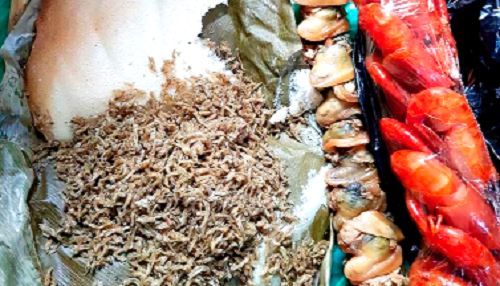 I don't know if any other language has a word or indeed, a concept that translates to the Ewe AGBAMEKANU. The word translates literally as “that with which you unpack”.

The idea is that every time you travel or you arrive home from some place and you are unpacking your luggage, you are expected to have brought something, a present of some kind, for those at home, and that present you brought with you is the AGBAMEKANU.

I remember that as children, we pushed this concept of agbamekanu to absurd limits. Every time my mother stepped out of the house, it could be to the market or to a church meeting or visiting a next-door neighbour, she would be welcomed back home with screams of ‘where is our agbamekanu?’.

I suspect that when the word first came into usage, travel was not an everyday phenomenon. Every time someone went from one town to another, it involved quite some adventure. The nearest settlement was an unknown entity and anyone who made a journey had undertaken some adventure.

Thus, the shortest journey back home would call for long narratives of what the traveller had seen. For years, those who went overseas came back with stories that captured the imagination of those who had never stepped out.

For a generation growing up on Instagram and live streaming, who are able to tell in real-time what is happening at the other side of the world, it might sound strange to talk about someone coming to tell a gathering of the school assembly what it was like to travel to America.

And then of course, precisely because movement was not as easy as it is today, once you travelled somewhere, you were expected to bring something back home as evidence you had been away and you brought back something peculiar to wherever you had been.

I am not quite sure how bread became one of the things that travellers brought back home with them as travel presents, but it was expected and many towns and settlements developed entire economies based on providing bread to take back home. I never quite understood why bread purchased along the journey route was more attractive than bread that was baked at home.

Once upon a time, Nsawam called itself the bread capital of the world and the bread sold there was meant to serve the needs of all the travellers along the Accra-Kumasi road.

I know that one of the serious considerations that had to be made when the bypass was being constructed was whether Nsawam wouldn’t lose its status as bread capital of the world.

Those going westwards bought their bread from Mankessim and those of us going Voltawards had Atimpoku and Sogakope to buy our bread and abolo.

If you went home, whichever way, the original home, Abutia in my case, and Accra, the acquired home, on the return journey and you didn’t have the bread or abolo and “one-man-thousand”, you were likely to get into a lot of trouble.

Time was, of course when areas were identified with specific items, for example, when someone was making a journey to Keta, you would ask for some shallots and rock salt; my friends from Krachi would bring yams. Today, the chances are you might find those items on sale at cheaper rates at Agbogbloshie or Accra Mall.

In much the same way, it used to be that if you travelled overseas, you were expected to do some decent shopping for friends and relations back home.
The idea being you would be going into shops that were not available back home in Ghana.

Now that everything is online and young people on their phones at Bogoso can tell what the latest fashion items are anywhere in the world and order them and have them delivered at their doors, I wonder why we are still asking for agbamekanu from overseas.

World travellers discovered long ago that many “authentic” local things they bought on their travels at tourist sites around the world were in fact, made in China, or Vietnam or wherever.

The idea of bringing a present home from your travels must have started as a sound one, as you would normally be expected to bring something new that was special from wherever you had been. This present would help tell the story of the place and people you had met on your travels.

Now that the young generation know what the world looks like and tastes like by looking at their phones, there should be no need for agbamekanu in their lives.

For a long time now, I have been having problems with the nails on my right thumb and index fingers. The nail breaks and flakes and the thumb in particular looks diseased.

I have tried everything, I have even consulted a doctor and got no joy. Since there was no physical pain accompanying the unpleasant look, I decided this must be something to do with old age and I stopped complaining and worrying, even though I was unhappy about it.

I think I have cracked the problem. The nail on my right thumb and index fingers now look fine. In the past four weeks, I have stopped trying to use my fingers to remove the protective plastic cover put around our water bottles.

Since the drinking water manufacturers started putting the plastic around the cover to stop people from filling empty bottles with tap water and passing it off as manufactured filtered water, it has become quite a battle opening a bottle of water in this country.

The plastic covering is crudely done and it takes a lot of trouble to remove it and get at the cover to open the bottle. Simply trying to drink a bottle of water has, therefore, become a full-scale technical procedure.

If you are in company, people offer to help you open the bottle after watching you struggle. Surely, we shouldn’t need specialist skills to be able to open drinking water bottles.

And then there is the problem of what to do with the plastic that you remove, that also becomes another source of waste disposal problem.

I don’t know anywhere else in the world that has to put up with this and all because some people in this country want to make quick money.

Then, we have the Ghana Revenue Authority (GRA) sticking pieces of paper on canned drinks that you have to try and remove before you can drink.

I remain hugely irritated every time I try to open a plastic bottle of water or canned drink, but I have solved one problem, I no longer use my fingernails.

This business of creating new problems by trying to solve existing ones is so Ghanaian.