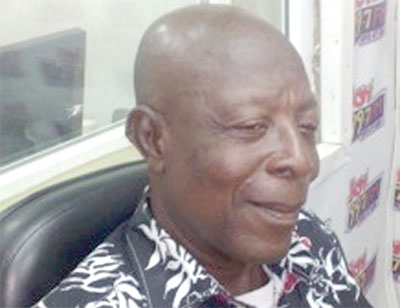 As a young man, the one career dream that Super O.D nursed was becoming a policeman. Being tall, strong and smart, nothing fascinated him more than a police uniform - blue black shirt over blue black trousers, cap, belt, boots and ..... But O.D was not destined to become one.

Super O.D, real name Osonoba Kwaku Darko, native of Agona Swedru in the Central Region, missed formal education on account of losing his father as a toddler and his mother, then a petty trader, could not afford the funds to support his education. That was how he missed recuitment into the police Force.

Still O.D did not despair. After attempting other ventures like trading and being a driver’s mate for six years, he obtained a driver’s licence and hoped to use it to enter the police force. “My second attempt didn’t materialise because I was failed by my instructors after some weeks of training because I could not pay a bribe of three pounds”, he told Showbiz.

He was obliged  to go into commercial driving and gained employment with the Accra City Council as a driver of one of their taxi cabs then popularly called  “Ponko Abodam” but he lost that job too after a while. It was at this point that a new career path opened for him.

“Luck smiled at me when I went to stay with a friend at Labadi. It was during this period that one day, Appiah Agyekum’s Concert Party came to Labadi and I joined the band on stage to sing as a backing vocalist. This was the starting point of my career in concert party theatre”.

“ I acquired the skill of making witty jokes from my mother who was nicknamed “Jack Johnson” for her jokes and soon found out that my jokes were in high demand and started hopping from one concert party to another until I finally settled with Oppong Kyekyeku’s Guitar Band.

“The troupe enacted the popular Aku Sika play which caught on well with one of the bosses at GBC and he arranged for the group to start a series of Akan Drama on GTV. It was at this stage that the group’s name was changed  to Osofo Dadzie Group and that was the beginning of my acting career.

“I started Osofo Dadzie on the 24th of October 1972 with the likes of S.K Oppong, Kojo Kwakye, Fred Addai, Mercy Offei and Akua Boahemaa but today, they are all gone. Dead. That is why I got furious when an Accra radio station announced recently that I was dead.

In his usual comic character, Super OD who was reluctant to mention his age when asked retorted “you will let my girlfriends leave me when they get to know of my age. I hope that when my girlfriends get to know that I was born on the 12th of January, 1935, they will not leave me because I am too old for them, otherwise I will hold you responsible”.

Following the huge success of the Osofo Dadzie series, Super was invited by H.M films during the advent of Ghanaian video films and played in movies such as  Double Cross, Fatal Decision and Crossfire. He is also known for his role in the popular movie, Abyssinia in the nineties.

Currently, he is working with a construction firm at Roman Ridge and recently featured on hiplife duo, Keche’s famous “Alunguntugui” video and the popular TV series “Bongo Bar”.

“You know that most of these new producers do not know the old actors so they do not contact us for roles but I think that they need to establish that relationship so that we can also lend our experience to the new crop of actors coming up”.

Super OD  who could not hide his dissatisfaction with what he said were more of  “entertainment films” than “educative films” in the market today challenged movie producers to work on better story lines than the usual romance movies which only serve to entertain than teach any lesson to the public.

Referring to movies like Fatal Decision and Double Cross to explain his argument, Super OD said “such movies did not only entertain people but educated them because the role of films then was to teach the viewers lessons by using real life experiences but today, that is not the case, everything is about entertainment which shouldn’t be”.

Final words? “ I appreciate everybody who watched our movies in the past but I want the public to compare the old movies to now so that they can correct some of the stories”, he said.