‘Something Must Kill a Man’ is a pot of lessons

AT the end of Latif Abubakar’s latest play, Something Must Kill a Man, which came off at the Labadi Beach Hotel, many lessons were learnt but the main one patrons took home was that a united front is impossible for any enemy to penetrate.

Other lessons were good communication, respect for others, and the need to seek God’s face in times of trouble.

The play staged by Latif Abubakar and his Globe Productions was held on September 2-4 and tells the story of the Dukes whose family business is in crisis and gets worse with the Covid-19 pandemic.

Duke Simpson, the only son of the Simpsons, is tasked with the responsible to revive the business.

But he was also unable to salvage the situation because of a myriad of reasons. Among them are his wife Aku, who is very troublesome and does not give him the peace he needs to put ideas together and make things work.

Another hurdle impeding his efforts to make the business operational again is with his workers who are divided because lack of motivation among others. 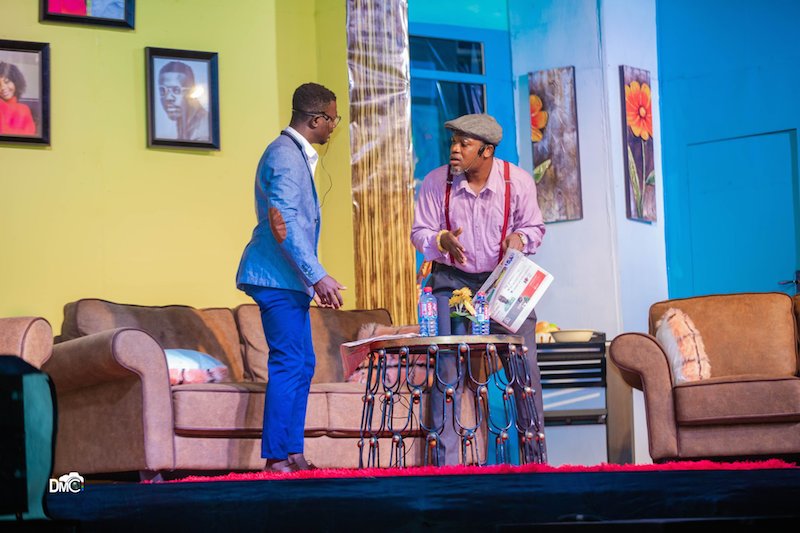 A scene from the play

Duke who also believes he is modern with fresh ideas is reluctant to consult his father, Mr Attah Simpson because he sees the him as old school.

Thinking his workers are part of the problem, Duke puts together a new team and hires the services of Esi, a new secretary who is an agent from the dark world and is on a mission to destroy.

Her intention is to create confusion and more trouble for the Simpson family and business. She succeeds having affairs with both father and son. She later chooses Duke over his father and moves in with him.

Duke gets a rude awakening and realises he needs to seek the face of God as part of the solution to the problems.

He realises he his old team is dedicated but he needs to talk to them as well as listen them, create a good environment for them to work, motivate them to give off their best among others.

When these steps were taken and through prayers, Esi is exposed, the team find out that things went sour because they were not together and that people who are united always wax stronger and cannot be defeated.

Some patrons at the event

Latif’s play made great use of songs, comedy, dance and it worked for the crowd as they sang along to all the songs used in the about two and a half hours play.

Some of the songs were Nigeria’s Timi Dakolo’s Amen, Diana Hamilton’s Adom, Nigeria’s Chuk’s, Running(To You) and Gyakie’s Forever.

Talking to some patrons after the show on Friday, September 3, Mr and Mrs Tetteh said they loved everything about the play, “we loved the entire show, the set and most importantly the venue, it was in the open space and that gave us a different feel.”

Jessica Okine, a student also said, “I loved Aku, she was my favourite character, I loved her Ga attitude, she played it well, it was so funny. This is my first time watching any of Latif’s plays and I must say, it was worth it.”

Kwarteng Mensah also agreed with Samuel’s views, “we were actually discussing it and asking ourselves so what kills a man.

"Like my friend said, maybe, we were expecting something else but the writer played with our minds and took a different turn which to some extent is great.”