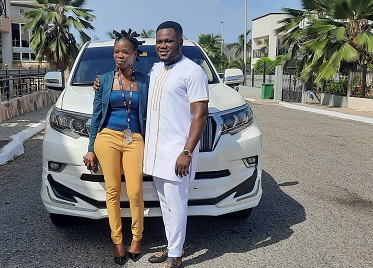 Angel FM presenter Ohemaa Woyeje has been gifted a Toyota Prado by her boss Dr Kwaku Oteng, CEO of the  Angel Group of Companies.

At a short ceremony to hand over the keys to the car at the residence of Dr Kwaku Oteng on Monday, April 19, his son Samuel Kofi Acheampong said Ohemaa Woyeje, who is the host of mid-morning show, Yadwuma Nie on Angel FM had made an exceptional contribution to the brand and deserves to be celebrated.

Speaking with Graphic Showbiz he said, “Ohemaa is being honoured today because of her work and her dedication towards making the brand a big one. When we decided to come to Accra and we called on her, she gladly agreed to come on board and told us that she was willing to put in hard work to make the brand a successful one and today it is.

“This is just to say thank you for all that she has been doing. We believe that this step will motivate her to do more. We also believe that with her in our circle we will achieve greater successes. When people put in work, you also need to find ways of letting them know that you appreciate their deeds.”

Ohemaa Woyeje, who was excited about the gift, thanked her boss for finding her worthy to be appreciated. “When I was called last night and told about this, I couldn’t sleep because I didn’t believe it. I know bosses appreciate people in different ways but this, the car is too much and I am grateful. From now on, my name is now Adjoa Prado.”

Ohemaa Woyeje started her media career in 2003 with Nkosuo Radio in Kumasi. She moved to Sky FM in Sunyani, then to Zuria FM in Kumasi.

She then moved to Accra and joined Top Radio where she stayed for seven years, handling the mid-morning show for five-and-a-half years. She hosted Work and Happiness on Adom FM for close to six years before leaving for Angel FM.