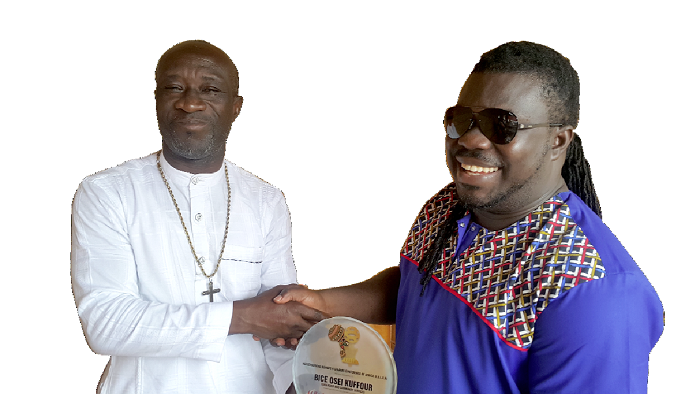 The President of the Musicians Union of Ghana, Bice Osei Kuffour aka Obour, has been honoured with the Humanitarian and Leadership Award by the Ecclesiastical Bishops and Leaders Conference of Africa (EBLCA) for the various contributions he has made towards national development.

According to EBLCA’s Executive Director, Prince Kofi Nyantakyi, the MUSIGA president’s award was based on his work as a national ambassador for tuberculosis and road safety as well as for being a campaigner for climate change on behalf of the British Council Climate in addition to being an Executive Icon of Youth Icons Africa.

Prince Nyantakyi said the EBLCA board decided to confer the Humanitarian and Leadership Award to Mr Kuffour also for his executive and advisory roles with bodies such as the International Federation of Musicians (FIM), School of Performing Arts of the University of Ghana, Ghana Music Rights Organisation (GHAMRO) and the National Commission on Culture (NCC).

The organisers of the awards scheme also cited the MUSIGA president’s ‘Obour-For-the-Girl-Child’ and ‘Ghana Reads’ campaigns which promote reading and support underprivileged girls to access education.

The MUSIGA president expressed appreciation to EBLCA and urged other creative arts practitioners to use their celebrity status to take up social issues that impact positively on society.

The EBLCA Africa Humanitarian Awards recognise individuals and organisations dedicated to the highest principles of humanity.