Fighting galamsey: Our water, our life 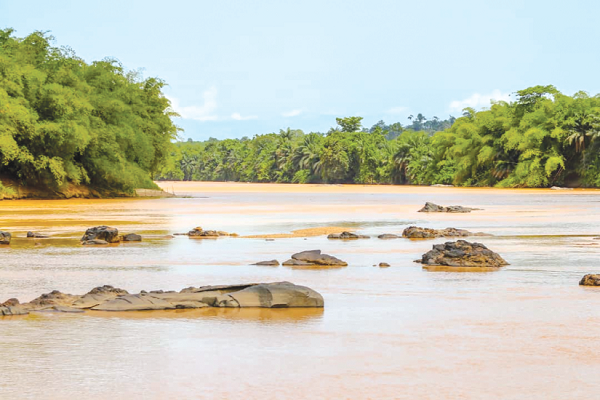 •This is the effect of galamsey on the Ankobra River
30.5k Shares

Water is the most critical resource issue of our lifetime and our children’s lifetime. The health of our water is the principal measure of how we live on the land,” Luna Leopold.

This quote by the U.S Geomorphologist and Hydrologist (1915 – 2006) means that water is life and quality water means quality life.

It is for the critical role clean water plays in human life that the United Nations (UN) prioritised access to quality water among the 17 Sustainable Development Goals (SDGs) that were adopted in 2015 and implemented in 2016.

Goal Six of the SDGs seeks to “ensure availability and sustainable management of water and sanitation for all by 2030.”

According to the UN, “clean water is a basic human need and one that should be easily accessible to all and there is sufficient fresh water on the planet to achieve this.”

Despite the fact that Ghana has many water bodies that can be harnessed for the use of its population, about 30 million, the resource is under siege by illegal mining activities, popularly called ‘galamsey’.

Beautiful rivers such as Ankobra, Bia, Birim, Densu, Pra and Offin that were once upon a time the pride of the country have been heavily polluted by galamsey operators and can no longer quench the thirst of the people or serve as a source of livelihood.

Armed with excavators, Chanfang machines and other equipment of mass water bodies destruction, the galamsey operators reach out to the bellies of these rivers; stir them up and unleash mercury, cyanide, sulphuric acid and other poisonous chemicals into them in their desperate search for gold.

This, they do without regard to the country’s mining laws — the Minerals and Mining (Amendment) Act, 2019 (Act 995), which prohibits mining activities in water bodies.

A tour of some of mining communities across the country spanning over a year revealed that the Ankobra, Pra, Offin and other rivers remain heavily polluted through incessant galamsey activities.

For instance, a number of visits to the Western, Western-North and Central regions between January and December, 2020 revealed how the Pra, Offin, Bia and Ankobra rivers were suffocating from illegal mining activities.

The water in these rivers had turned milky-brown and could not pass the scientific definition of water as any liquid that is colourless, odourless and tasteless.

At Dunkwa-on-Offin in the Upper Denkyira East District in the Central Region, sections of the Offin River, which is the main source of water for the residents, have been blocked by illegal miners, making it difficult for the people to have potable water.

The illegal miners have also obstructed the course of the Bia River at Tugakrom, near Dadieso, in the Suaman District in the Western-North Region, denying thousands of the residents in that region access to water.

The incessant pollution of the Pra and other water bodies is threatening raw surface water treatment by the Ghana Water company Limited (GWCL).

Raw water that flows to GWCL intake points in the two regions have high levels of sludge, a situation that has resulted in significant increase in operational and maintenance cost and made the production process strenuous.

For instance, figures from the GWCL indicate that the turbidity level of the raw water at the Sekyere-Hemang Water Station had shot up from about 500 nephelometric turbidity units (NTU) at the time of construction in 2008 to about 1,500 NTU currently.

The picture at the Daboase intake point is not any different as the turbidity of the water, which was around 54NTU in 2007, had increased to more than 3,000 NTU.

In the Eastern Region, water pollution through galamsey has caused an acute shortage of potable water to residents in that part of the country.

Consequently, the GWCL has on many occasions shut down water treatment plants at Osino, Bunso and Kyebi.

In February 2020,  the Ashanti Regional Office of the GWCL decried the extent to which the pollution of the Odaso River through galamsey had negatively affected the water treatment plant at Odaso.

According to the Head of Public Relations at the GWCL, Mr Stanley Martey, this unfortunate situation had compounded the woes of the GWCL, which is struggling to bridge the gap between the national demand and supply of potable water.

Since 2017, the government has waged a war against illegal mining in the country, with the deployment of ‘Operation Vanguard’, a joint military-police taskforce, to clamp down on the activities of galamsey operators.

The continuous pollution of water bodies and the depletion of forest reserves by illegal miners after more than four years of the declaration of the war on galamsey indicate that more needs to be done to save our water bodies.

Currently, the government is courting the support of chiefs, political parties, players in the mining industry and other stakeholders to holistically tackle the menace.

The Minister of Lands and Natural Resources, Mr Samuel Abu Jinapor, led a team of government officials to some parts of the Western and Central regions to see the negative impact on galamsey on the residents.

The team, which included the Minister of Sanitation and Water Resources, Ms Cecilia Abena Dapaah; Information Minister,  Mr Kojo Oppong-Nkrumah; officials of the GWCL and some Members of Parliament (MPs), saw the reality of how galamsey activities had destroyed water bodies and the consequential effect of the menace on GWCL water treatment plants.

Subsequently, the government ordered the removal of all mining equipment from water bodies within one week.

That was followed with the deployment of ‘Operation Halt’, a troop of 200 soldiers, on April 28 to flush out galamsey operators on the Pra River in the Western and Central regions.

On May 7, 2021, the government deployed another troop of 400 soldiers for the second phase of Operation Halt, focusing on other tributaries of the Pra River.

Barely a week after the deployment, the Minister of Defence, Mr Dominic Nitiwul, revealed that the first two phases of the operation led to the arrest of two Chinese and the burning of 37 excavators.

If water is indeed, life, all citizens must rise up and protect our dear lives from nation-wreckers.

We must not sit aloof and allow a few greedy people to fill their pockets with our mineral wealth and leave us to hunger and thirst for water.

As for the health implications of the heavy presence of toxic chemicals in our water bodies, your guess is as good as mine.

It is predicted that Ghana will be importing drinking water in about a decade if we fail to protect our water bodies from galamsey activities.

So-called "big men" have always been cited as fueling the galamsey menace. Do those "big men" live in Jupiter? Or Mars? They live with us. We know them. It is about time to name and shame them.