Breaking the silence of Ohum - A Christian perspective 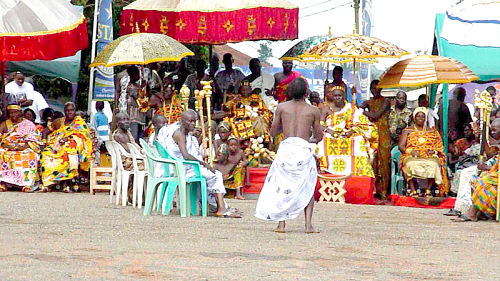 A few minutes to the time, all the chiefs moved to the front of the palace where they took their seats
30.5k Shares

I told them I was there to learn about the weeks of silence, because I knew in many communities where this was practiced, it sometimes set church folks against traditional authorities, when they had to lay down their musical instruments for a moment of silence.

One of the elders asked rhetorically if there was anything wrong with having an annual period of silence and reflection after a long period of noisy activities. The Kyidomhene quoted from the Bible, which amounted to preaching to the converted, he was right: the bible says to go indoors when you want to commune with God.

After chatting with the elders, I moved over to the drummers who had prepared their drums in preparation for the moment when the ban would be lifted.

The Chief Drummer, Opanyin Gyan, also explained that when the silence was broken, their drums “will do a lot of the talking”: the ‘atin’ (the smallest drum) will be saying “agyei-agyei” representing the pain they were driving away while the ‘atunpan’ and other big drums declared victory for a new year.

A few minutes to the time, all the chiefs moved to the front of the palace where they took their seats. I understood that they sat outside instead of within the palace because they were welcoming the new year as one welcomes a visitor into the home.

The breaking of the silence began with the beating of the drum and the sounding of the horns, then the Bamuhene, who is responsible for sacred rituals gave a shout (as did the Jews, when Jericho was taken) - this is called the hooting of the Ohum, which is followed by shouts by all the people.

Particularly the children rejoiced a lot, clanging and beating pans, tins and anything that made a sound. The hooting away of the troubles of the old year was repeated a number of times before all returned into the palace and rejoiced with more drumming and dancing, till it grew darker.

The second day was for eating the new yam (or harvest) and of course the sound of fufu pounding could be heard from many homes and all kinds of animals would be slaughtered by those who could afford a feast.

An interesting part of the festival involves hundreds of schoolchildren delivering firewood to the palace. Symbolically, the wood is for the cooking of the ritual First Meal, which goes on at the palace on Wednesday as the chiefs and elders receive guests and visitors from far and near.

This year, the palace received clergy from numerous churches, the local Imam and Muslim chiefs, heads of all ethnic groups, teachers from all the schools in the community, government officials, the director and staff of the local Cocoa Research Institute, and to crown it all, the Member of Parliament of the Abuakwa North Constituency, Ms Gifty Twum-Ampofo.

To the community and its traditional leaders, the ban on noisemaking and the joy of the festival are regarded as a necessary part of their lives and wellbeing but some church leaders and their adherents see the whole thing as idol worshipping and therefore take an aggressive stance against it.

To them, their mission of presenting Jesus as Christ and Saviour means they ought to take a stand against traditional cultural practices and this deepens the divide between the church and the traditional community, hampering cohesion and subsequent development.

However, what I saw in Ati was different, because an extremely cordial relationship existed between the traditional leaders and the religious leaders. Indeed, the clergy in attendance prayed and lifted the land and Nananom before the throne of God and there was no objection at all when a senior Presbyterian Church Pastor declared without fear that from the great and magnificent kingship of God, had he chipped a piece for Nananom and adorned them with beauty and wisdom to lead us, asking God to do more for them and with them.

As a pastor, one thing that will stay with me forever from my trip is the near picture of Jericho (in the Bible), with the horns, the cry and shout that lifted the ban on noisemaking.

It is exactly like the moment in the bible when Joshua gave the shout and the trumpets and the shout of the people brought the walls of Jericho down.

Why can’t Christian leaders see the period of the ban as an opportunity for a period of silence and reflection in the Christian tradition, so that we do not only have a peaceful compromise but also enable all the community to focus on asking God for blessings for the New Year.

Come next year, I hope that like the pastors of Akyem Ati, Christians everywhere in the country will use the ban on noisemaking as a time to fast and pray, to observe the silence and be ready to shout out our troubles and pray for a fresh anointing for a season.

The Author is the Head Pastor of the Praise Community Church and a Community Development Specialist in London.