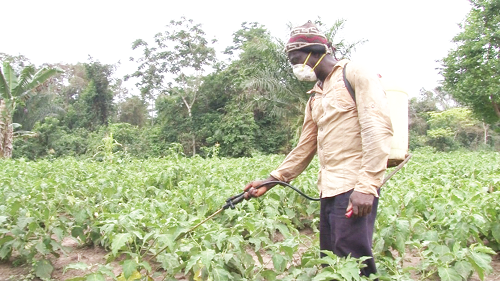 Farmers are misusing pesticides by spraying too close to harvest, according to a study
30.5k Shares

He use of agrochemicals in controlling pests and weeds to enhance crop production has gradually become a new normal in agricultural production in the country.

Agrochemicals, comprising fertiliser, herbicides, fungicides and insecticides, have brought a huge relief to farmers, as they have made farming easier, as well as contributed to increased crop yields and food security.

Ghana imports an estimated over $241 million worth of agrochemicals annually to meet the demands of farmers in the country, according to a report by German development agency (GIZ) and the Centre for Agriculture and Bioscience International (CABI), an inter-governmental development and information organisation.

However, the rampant usage of agrochemicals and the indiscriminate disposal of the waste from the products have become an accursed thing to both farmers and consumers as the practice portends fatal health implications to humans and endangers the environment.

The phenomenon is widespread across the country, particularly in the rural areas where most smallholder farmers have no formal education to enable them adhere to instructions on the usage of the chemicals and proper disposal of their waste.

When the Daily Graphic recently toured some farms in the Northern Region, it was observed that some farmers had disposed of empty agrochemical containers on their farms haphazardly, while others had also discarded them by the streams.

A farmer at Yendi, Mr Mahama Ezekiel, and his wife were met fetching water from a pond littered with empty chemical containers to prepare their lunch.

He had also designed the empty containers of the insecticides to serve as their drinking cups, saying that “These chemicals you see don’t kill human beings but only weeds and insects".

Another farmer at Bimbilla, Mr Thomas Nakoja, told the Daily Graphic that he threw away the containers anyhow and did not know the effect of such practice on the environment and his health.

An Agronomist at the Department of Soil Sciences of the University for Development Studies (UDS), Nyankpala campus, Dr Joseph Xorse Kugbe, said the indiscriminate use of chemicals and disposal of the waste from them if not curbed posed serious health implications and threatened the land and water bodies.

He attributed the phenomenon to the lack of education and urged farmers to adhere to safety measures to protect the environment, saying: "When an industry produces these chemicals either in solid or liquid form, depending on how it is being disposed of, it could be hazardous to our environment."

For his part, the Assistant Director at the Northern Regional Directorate of the Ministry of Food and Agriculture (MOFA), Mr Michael Afranie, called for effective collaboration between various stakeholders to regulate the usage of agrochemicals.

The incidence of the misuse of agrochemicals in the country, especially in the northern part, is not a new phenomenon.

A study conducted by the Northern Presbyterian Agricultural Services (NPAS) in collaboration with partners to unearth the deplorable state of pesticides handling and usage by farmers in northern Ghana and to assess the risk and damage to humans, livestock and environment, was published in April 2012.

It stated that “Ghanaian farmers who use chemical pesticides to control insects and diseases on their crops are potentially exposed to pesticides through the skin, on the eyes or through inhalation or ingestion, with key risks being death, cancer, birth defects and damage to the nervous system.”

The study gave the most common problems from the use of chemical pesticides as skin irritations, headaches, general body weakness, difficulty in breathing and dizziness.

“NPAS’ survey of 183 farmers in 14 villages in the Upper East Region has found that more than a quarter had recently suffered from directly inhaling chemicals and one fifth from spillage of chemicals on the body. In late 2010, 15 farmers died from suspected pesticide poisoning in the Upper East Region. Most of these deaths resulted from poor storage of pesticides, which seeped into food stocks.

“A 2008 study - the most comprehensive analysis of pesticide contamination on farmers in Ghana - found the presence of organochlorine pesticide residues, including DDT, in the breast milk and human blood of vegetable farmers,” the study further stated.

Touching on the unsafe use of pesticides by farmers, the study affirmed, “Storing pesticide containers near to, or even in, food stores is widespread and has contributed to several recent deaths and an untold number of illnesses. There is also widespread re-use of containers for storing food or water for humans or livestock.”

Farmers are misusing pesticides by spraying too close to harvest (thus contaminating the crop before consuming it), the study added.

Ghana’s primary legislation regulating the use of pesticides is the Environmental Protection Act of 1994 while the two main bodies responsible for pesticides surveillance and monitoring are the Environmental Protection Authority (EPA) – whose Chemicals Control and Management Centre is directed by the Pesticides Registrar – and the Plant Protection and Regulatory Services Directorate (PPRSD) – whose Pesticide Management Division supervises and trains inspectors and extension officers.

The Customs, Excise and Preventive Service (Management) Law of 1993 also regulates all imports into Ghana, including chemicals and gives CEPS officers the power to search people and seize prohibited chemicals.

There are also the Environmental Protection Agency (EPA) Act 490 and the Pesticides Control and Management Act 528 on the proper use of pesticides in Ghana.

The International Labour Organisation (ILO) indicates that 99 per cent of all fatal accidents with agrochemicals occur in developing countries, which calls for urgent measures to safeguard the Ghanaian farmer.

There is, therefore, the need for various stakeholders such as the EPA, the Ministry of Food and Agriculture, the Food and Drugs Authority (FDA) and the Ghana Standards Authority (GSA), to intensify their campaigns, supervision and sensitise farmers to safeguard the environment and lives.