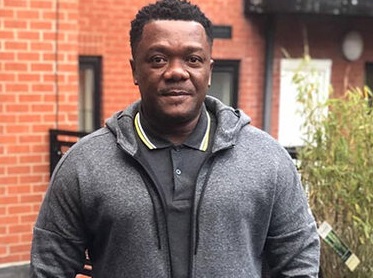 Kelvin Ikeduba has been the notorious ‘bad boy’ of the Nigerian movie industry for as long as anyone can remember.

But that does not mean the cross over actor is as bad in real life as his roles in movies have portrayed him. While some say the likes of Jim Iyke, Hanks Anuku among other bad boy actors have long faded into oblivion, Ikeduba has remained visible and undaunted even in the face of being stereotyped.

The tough-talking actor is widely known by his fans as ‘a gangster’ because of the natural affinity he has for the “bad boy” roles which he interprets with ease.

Though it gives the actor a lot of concerns, according to him, Kelvin in real life is not as bad and wicked as the Kelvin that you watch on the screens.

“There’s a very big difference. The Kelvin you watch on the screens is the Nollywood bad boy, while the Kelvin in real life is a God fearing man,’ the actor said, in a chat recently. "Everything about my life is a testimony. I believe so much in God, but I wouldn’t say I am all that religious."

“I try to be myself any time I am not on set. At the end of the day, most people expect to see me the way I am on the screen. But that’s not the case with me. It would be a bad thing if after playing a bad boy role in movies, I replicate the same in real life.”

Ikeduba, who’s famous for his roles as a cultist, thief, bully and villain, said he has been assaulted as well as called names because of his bad boy role in movies.

Kelvin Ikeduba in one of his bad boy roles

Narrating his experience, the Delta State-born actor said: “I have had different experiences. I have been slapped, called names because of my roles in movies. But I believe it’s all about mistaken identity.’

“You know, Nigerians could be fanatical if they want to be. Some people would ask me why did you do that in the film and so on. I don’t see it from the negative side. Rather, I see it from the positive side that I played the character well and that’s why I am getting all these reactions.

"So, most times when those negative remarks come my way, I don’t feel bad about them. Rather, I just tell myself for people to react this way, Kelvin you are very good at what you are doing,” the cross over actor added.

On whether he has had an ugly encounter with cultists following his bad boy roles in movies, Kelvin answered that it was the contrary.

“No cult group has ever attacked or warned me. Instead, I have been commended and given things by them,” he said.

For the versatile actor, a breakthrough in the Nigerian entertainment industry is not always measured by how good you are, but ‘it’s based on when God says it’s your time to blow.’

The tough-talking actor, however, said he wanted a situation where the government would allow the film makers to produce movies that could tell the Nigerian story.

“If there’s anything that we should look into in Nollywood, it would be the kind of stories we portray. Let’s do more movies that would portray our lifestyle as a nation. The movie producers always give execuses that the government would not allow such movies to see the light of the day.
"What made America what it is today is beacuse of the Hollywood producers who are making movies that document the American history. But in Nigeria, the case is different. The government should allow our producers to make original movies that will tell the Nigerian story,” Kelvin posited.