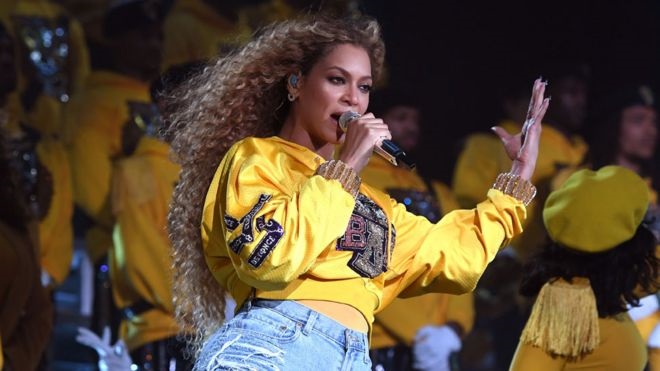 "Put your fists up in the air, show black love," sings the star. "Need peace and reparation for my people."

The song was released on Juneteenth, a holiday marking the official end of slavery in the US.

The celebration originated in Beyoncé's home state of Texas but is now celebrated annually on 19 June throughout the US, with varying degrees of official recognition, sometimes under the names Emancipation Day or Black Independence Day.

Black Parade is Beyoncé's first solo release since last year's Homecoming, a live album and documentary covering her blockbuster performance at Coachella in 2018; and The Lion King: The Gift, which accompanied Disney's live action remake of its classic animation.

"I'm going back to the South, where my roots ain't watered down," she sings as the song opens.

The lyrics go on to reference the Covid-19 pandemic ("Fly on the runway in my hazmat"), police brutality ("Rubber bullets bouncing off me") and Tamika Mallory, a prominent activist in the Women's March and Black Lives Matter movements.

The track appeared on streaming services shortly after the star launched Black Parade Route, an online directory of black-owned businesses selling everything from fashion and beauty products to home furnishings and coffee.

"Being Black is your activism. Black excellence is a form of protest. Black joy is your right," wrote the singer on a tagline on her website.

According to the site, the initiative will benefit the star's BeyGOOD's Black Business Impact Fund, which "support[s] Black-owned small businesses in need."

"Happy Juneteenth Weekend! I hope we continue to share joy and celebrate each other, even in the midst of struggle," said the star in an Instagram post announcing the launch.

"Please continue to remember our beauty, strength and power."

Beyoncé has been vocal throughout the the anti-racism protests sparked in May by the death of George Floyd.

In a video on her Instagram, she said she felt "broken and disgusted" and demanded justice for Mr Floyd, who died after a police officer knelt on his neck for almost nine minutes.

"No more senseless killings of human beings," she said. "No more seeing people of colour as less than human. We can no longer look away."

"Continue to pray for peace and compassion and healing for our country.