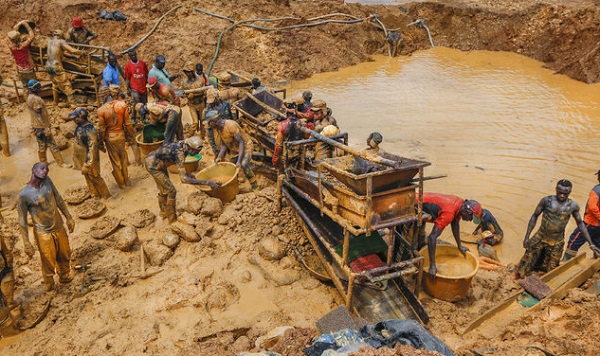 The involvement of foreigners in illegal mining activities in the country is troubling.

At least, so says a Deputy Minister of Lands and Natural Resources, Mr. George Mireku Duker, when he led a special team of military and policemen to clamp down on such activities recently.

Seven illegal miners were arrested in the New Abirem District in the Eastern Region last week, following a distress call by communities in the area to the Lands Ministry over the destructive activities of illegal miners in the area.

Out of the seven arrested, two were Ghanaians, while the remaining were foreigners.

Leading the charge to effect the arrest of illegal miners, Mr. Duker said: “It is unfortunate that people are still recalcitrant and not listening to calls to stop galamsey. The more worrying part is that there is an invasion by foreigners, which is now the new trend.”

The questions that remain unanswered are: How do these foreigners enter the country? How do they manage to find themselves in these hinterlands?

Beyond any other issue is the complicity of Ghanaians: chiefs, politicians, religious and traditional leaders and elders, including individuals in illegal activities.

In April 2021, the Chinese Ambassador to Ghana, Mr. Shi Ting Wang, was reported to have said that it was important that Ghanaians first stopped aiding foreigners in the galamsey business if efforts at fighting the menace were to be successful.

He said that in response to a question on the involvement of some Chinese in illegal mining in Ghana.

It is significant that a key function of the Ghana Immigration Service (GIS) is regulating and monitoring the entry, residence, employment and exit of all foreigners in Ghana.

The Ministry of Foreign Affairs and Regional Integration is also one of the frontline agencies when it comes to administering foreign stays in Ghana, with other foreign embassies.

Ghana has all the laws and the capacity to ensure that no foreigner ‘invades’ the country to engage in any illegal activity.

The fact of the “invasion of foreigners”, as stated by the Mr. Duker, is an indictment on all public officers, political heads and agencies responsible for the presence and stay of foreigners in the country.

In other jurisdictions, the activities of foreigners are not left to chance. Foreigners are monitored from the first day they enter until the day they leave the borders of that particular country.

Details of where a foreigner will live, his or her activities, movements and associations are all taken down and thereafter monitored to ensure that the person keeps to whatever he or she claims to be in that particular country for.

In Ghana, it seems that foreigners are given a ‘laissez-faire’ passage and stay, enabling them to engage in illegal activities too.

Indeed, Ghana has none to blame but itself for the ‘invasion’ of foreigners to carry out illegal activities on our soil.

Political and institutional heads and all citizens must be patriotic enough not to allow greed to get the better part of them to lead the pillaging of our country.